Speakers address anti-Christian prejudice and the need for a robust boycott, divestment and sanctions movement 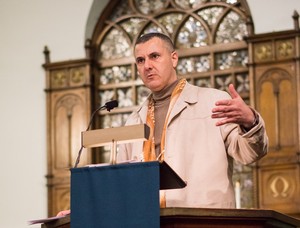 Omar Barghouti speaking on 'BDS & the Ethical Obligation to End Complicity in Oppression' at the 2015 IPMN gathering in Chicago. —Gregg Brekke

Concluding its 2015 annual gathering, the Israel/Palestine Mission Network (IPMN) of the Presbyterian Church (U.S.A.) recommitted itself to finding hope and peace for Israel/Palestine even as tensions and violence escalate.

Meeting at Chicago’s Cenacle Retreat and Conference Center Oct. 29–31, 2015, the group spent time in worship, workshops, synod gatherings and hearing from Palestinian partners. Many attendees had also visited Israel/Palestine recently and brought first-hand reports from partners in the region.

Several workshops on Friday introduced emerging issues and concerns. A workshop titled “Liturgical Language” invited attendees to consider how the use of terms such as Israel, in historic and biblical or hymn references, can be understood separate from the modern state of Israel. Conversation took place regarding possible divestment from the global security company G4S due to what the group sees as human rights violations against Palestinians. They also spoke of the “No Way to Treat a Child” campaign, which seeks to raise awareness of the Israeli military’s detention of children.

A Friday afternoon keynote speech by Sa’ed Atshan, who is originally from Palestine and is now a professor of peace and conflict studies at Swarthmore College, was titled “East-West Solidarity in a Time of Christianophobia.”

“How do we build greater solidarity between Palestinian and American Christians?” Atshan asked at the outset of his presentation. “How de we also address the struggles of Christian communities throughout the Middle East and their possible extinction?”

These questions, he posed, are at the heart of the struggle to maintain a Christian presence in the Middle East. He also named Israeli policies as the main factor in the exodus of Christians from the region. 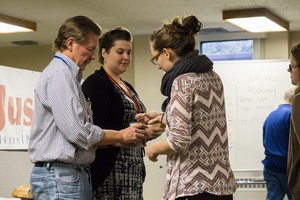 “As a result [of these policies], Palestinian Christians are leaving the country en mass,” he said. “In 1948 Christians made up 20 percent of the population of the land now called Israel. Today that number is only two percent. Many people think that’s due to Islamic extremism, but it’s primarily due to oppression by the Israelis.”

He said Christians also face a perception problem, similar to Islamophobia, the fear and suspicion of Muslims.

“In the Middle East context, Christianaphobia is formative,” said Atshan. “The discourse around anti-Semitism is very serious given the Holocaust, and Islamaphobia is a big deal because of imperialism and U.S. intervention. But in the Middle East context, we need to deal with the fact that Christianophobia is real. [Christians] are being assumed [to be] western, part of the Crusades, part of George Bush’s anti-Arab pronouncements.”

“We’re accused of being beholden to the West,” he lamented. “That we are a threat.”

He suggested attendees counter these perceptions by confronting the type of Christian Zionism that supports Israel on the basis of Jesus’ second coming; by recognizing that because of the amount of U.S.-backed military aid received by Israel this is an American issue; through continual use of boycott, divestment and sanctions as a means of opposing oppression of Palestinians; and by continuing to listen to the voices of oppressed people in Israel/Palestine calling for a secular, democratic state that protects peoples’ rights.

Omar Barghouti delivered the evening keynote presentation on “BDS & the Ethical Obligation to End Complicity in Oppression.” Barghouti is one of the founders of the Palestinian boycott, divestment and sanctions (BDS) movement.

“It’s important for our ethical principles not to hold an entire ‘other’ collectively responsible—not every single person on the other side is collectively responsible for the sins, for the evil, committed by the regime of occupation, colonialism and apartheid,” Barghouti said of efforts at reconciliation and dialog within the framework of BDS. “We target the systems. We target the institutions. We target the corporations that make the system continue, not the humans or the individuals.”

When asked why Barghouti was focusing his BDS efforts on Israel and not other countries considered to be oppressing people, he replied, “It does not make sense to ask a Palestinian why we are ‘singling out’ our oppressor.”

“[Israel] singled us out for colonization,” he continued to the applause of many in attendance. “Palestinians did not choose Israelis to occupy us. They occupied us. So we have to resist them. Who’s singling out whom, exactly? South Africans did not choose Afrikaners to occupy them; [Afrikaners] occupied them, they colonized them, they kicked them out, they ethnically cleansed them. They had to resist.”

Barghouti rephrased the original question, saying, “I assume your question was directed at Americans, at Presbyterians: ‘Why are you singling out Israel? Why did you pass a divestment resolution against companies involved in Israel’s occupation?’”

“The Presbyterians did not just pass a resolution against Israel’s occupation,” he concluded. “They’ve passed resolutions over the years against many oppressors: environmental oppressors and many human rights violators. So Israel is not the only one.”

IPMN concluded its business with a financial report and included grant allocations for the upcoming year.

Although approved for grants by the IPMN Steering Committee, because the awardees are not currently PC(USA) partners, the following grants will not be distributed until a partnership can be established. Barring such an arrangement, the funds will be allocated to existing PC(USA) partners.

The IPMN budget report identified $20,000 in grants plus an additional donation of $150 toward grants; $20,000 in support of mission co-worker Kate Taber; $20,000 toward its General Assembly budget; $10,000 in travel grants, annual meeting scholarships, speaker payments, and subsidies for steering committee members invited to speak with international partners; and $15,000 for remaining costs including advocacy, education, communication, their website, the Hosanna Prize and administrative costs.

The 2015 budget of $85,000 is expected to be the same for 2016. The group has not announced endorsement of or opposition to proposed overtures to the 2016 General Assembly in Portland, Ore.

The 221st General Assembly of the PC(USA) in 2014 narrowly approved a measure recommending that the Board of Pensions, the Foundation and its members divest from three corporations whose products it believes contribute to the Israeli occupation of Palestine. The measure asserts that products made by these companies—Caterpillar, Hewlett-Packard, and Motorola Solutions—are used by the Israeli government in the occupied territories and are not in compliance with the General Assembly’s policy on socially responsible investing.

In calling for divestment from these three companies, the General Assembly also reaffirmed Israel’s right to exist as a sovereign nation within secure and internationally recognized borders in accordance with the United Nations resolutions in addition to a continued commitment to interfaith dialog with Jews, Muslims and Palestinian Christians.

Several groups continue to advocate for the PC(USA) to repeal the boycott measure. Among them is Presbyterians for Middle East Peace, which urges the use of tactics other than boycott, divestment and sanctions as the best means to bring about peace in the region.