The story of a high-quality El Salvadoran wine, Hidden Flame, began more than a decade ago.

Pastor Santos Carpio was having a conversation with God.

Little did he know what would result.

That he would live.

That through his church — Tabernaculo Biblico Salem — women in the community would “find their voices” by producing that wine.

That he would lead his community in promoting and advocating for small family agriculture.

And that he would be connected to Presbyterian churches in the North — through the Presbyterian Hunger Program’s Joining Hands Network, Red Uniendo Manos El Salvador.

Fighting a life-threatening illness, Carpio felt God asking him to improve life for the entire community — and not just the church.

He was “in conflict with God.”

Being obedient, Carpio began talking with people in his community about the vision he had received — that “God wants to improve our lives here.”

The more he talked, the more people listened. And gradually, as the word spread, things began to happen.

And we — a group of 15 Presbyterians who traveled on the Voices from the Border andBeyond seminar between January 23 and February 1 — were fortunate enough to see some of its beauty, in the home of church member Gloria Joaquin.

There, they began the wine-making project, making in plastic jugs what would become the Hidden Flame using the Jamaica flower (similar to hibiscus), orange and rice.

Knowing of the good work he was doing through his church in the community, Van Nostran invited him and other local church leaders to participate in the farmer-to-farmer Agroecology Training School.

Sponsored by the Joining Hands Network of El Salvador, which Van Nostran facilitates for the Presbyterian Hunger Program, the school works to bring people together to transform a broken and unjust food system.

“To see the transformation happening in Pastor Santos’ church and community through slow and steady work is incredible,” says Van Nostran. “Lives have definitely been impacted through our partnership.”

Church and community leaders used their training and ongoing support from Joining Hands to develop patio farms, along with the chicken-hen projects, for some 35 families who are now raising enough food for themselves. 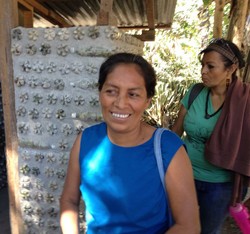 Gloria Joaquin showing off her farm, including her “bottle bathroom” — whose floor she is making out of colored bottle caps. —Kristi Van Nostran

Joaquin gathers around 40 eggs a day and some 300 tomatoes per season, which she and her children sell to neighbors. She also raises 200–300 tilapia through the winter season when water is abundant. Some of the fish is sold locally, but most of it and the vegetables, fruit and herbs she cultivates are primarily for consumption, for her and others nearby.

“God helps me every day,” she says. “With blessings here, so that I might help my neighbor.”

Other leaders in the village of El Espino passionately describe their work of germinating and growing their own seeds and working collaboratively at the national level to draft legislation to protect small family agriculture.

They want not only increased food security but food sovereignty. That means they want to sow and cultivate their own seeds and eat the food they want to, without interference from the global agribusiness corporations.

“We hope you will join us in demanding that toxic agrochemicals no longer be exported here,” says Carpio, his voice rising, reminding us they have effectively been banned in the U.S., but not El Salvador.

“God desires abundant life for all people in all places, like El Salvador,” says Van Nostran. “What sets our work apart from other organizations [are our] raising awareness of injustice and inviting Presbyterians to add their voices in solidarity to the struggle for food justice here.”

Back in 2012, when Carpio was increasing his knowledge about food justice through the Joining Hands training, he met a Catholic priest, and despite a historic rift between evangelical and Catholic churches and their leaders, a deepening friendship and relationship developed.

At the closing celebration of that yearlong training, Carpio shared some of the Hidden Flame wine with the priest. After filling the priest’s cup, the pastor remarked, “Before becoming involved with Joining Hands, I never would have dreamed of sharing a cup of wine with a Catholic priest as brothers.”

And once again, word began to spread about this wine, these women and this church that was being obedient to God in order to make life better for those who lived there.

Eventually the women were told about a contest they should enter. Sponsored by the International Fund for Agricultural Development and the Ministry of Agriculture and Livestock in El Salvador, it would award a $40,000 prize to the most entrepreneurial new product entered.

The women and their Hidden Flame wine won that prize.

Upon receiving the award, one of the entrepreneurs, Lillian Arevelo, and her family decided to donate land, in the form of a loan, to the wine-making project cooperative. It is where the new winery is now housed, complete with holding tanks. 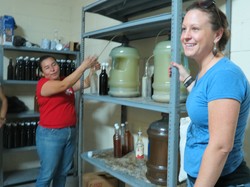 The women produce only as much wine as they can sell, currently about 200 bottles a month. With their profits, the cooperative is buying back the land — thus paying off the loan.

To these women, the Hidden Flame label on their wine bottles symbolizes their lives since Carpio came to the church and village with God’s vision.

The wine, they say, “has very many good benefits.” They add, with laughter and delight, “We are like the hidden flame, for we have found our voices.”

Now able to bring income to their home, feed their children and contribute to their education, the women are creating a future enabling them to stay on their land rather than having to migrate for economic reasons.

“We are satisfied,” adds Arevelo, “and convinced [that] with effort and dedication any woman can reach her goal.”

Editor’s note: The One Great Hour of Sharing offering, taken in most Presbyterian churches on Palm Sunday or Easter, funds the Presbyterian Hunger Program.