Two women, two borders, one cause

In witnessing the plight of thousands of Central American migrants seeking hope along dangerous paths, two women offer a temporary home for the homeless. 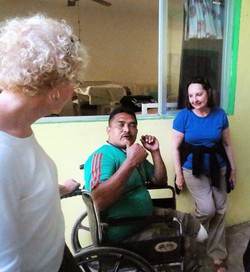 Virgilio lost both legs when he fell from atop the so-called ‘La Beastia — “The Beast." —Paul Seebeck

As we — 15 Presbyterians on the Voices from the Border and Beyond seminar — prepare to cross the Mexico–Guatemala border, we remember the voice of Olga Sánchez Martínez.

“I came here to die,” she says, “but I’m still here. The Good Shepherd healed me.”

We see also the face of Sister Christine Garcia, a Roman Catholic nun. Her smile tells migrants, weary from a long and dangerous journey, that they have found, here on the Mexico side of the U.S. border in Agua Prieta, a place at last to rest.

Like bookends, these memories record for us a week of traveling through Arizona and then Mexico. This trip, made possible by the Presbyterian Mission Agency, has turned out to be something of a pilgrimage for us, as we prepare to enter the Central American countries of Guatemala and El Salvador — and as we listen to the often-unheard voices of men like Virgilio.

From Honduras — and already deported once from New Jersey, where he was saying with relatives — Virgilio had been migrating south again when he fell from riding atop the so-called La Beastia, the “Beast” freight train, his legs crushed in the fall.

Red Cross International brought him here, Tapachula, Mexico, to the Shelter of Jesus the Good Shepherd of the Poor and Migrant, a refuge founded by Martínez to share the healing she had once experienced.

“I’m not sure how long I’ll be here,” Virgilio says, with a hint of wistfulness in his voice. “Hopefully until I get my new prosthetics.”

‘A widow for God’

After hearing she was terminally ill — and pregnant with her third child — Martínez returned home from Mexico City, seeking solace in the church in Tapachula, a large border city in the southern Mexican state of Chiapas.

A priest invited her to visit the sick in the hospital. Seeing all the lonely and injured people lying in hospital beds, she began to pray. Through her prayer, she felt God asking her to take care of those “rejected by society.” So she went into the streets “begging” for money.

“God gives me orders, and I am obedient,” she says. 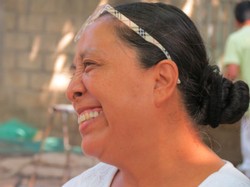 Olga Sanchez Martinez became in her words “a widow for God” after she was healed of a terminal illness. —Paul Seebeck

Eventually Martínez, who proved the doctors wrong in the diagnosis of her “terminal” illness, was able to buy a piece of land nearby and build a shelter. That was more than 20 years ago. Now, the Shelter of Jesus the Good Shepherd has sleeping space for up to 50 residents, a medical office, a kitchen and dining room, an education and sewing room, a chapel and a backyard for a future garden.

The shelter has helped so many people, in fact, that in 2009, the Dalai Lama honored Martínez with an Unsung Heroes of Compassion award.

Chan is Guatemalan. He migrated to the U.S. in his early 20s. He became familiar with the Good Shepherd’s work and considers Martínez a friend and partner in ministry.

“I leave the Good Shepherd feeling good,” he says, aware that one day fellow Guatemalans may need the shelter and care Martínez provides.

Many setting out on the long journey are injured at its beginning, when they try to grab the moving La Beastia as it rolls through the Central Border.

In solidarity with all people

Martínez’s shelter is just one of many partners helping Presbyterian Border Region Outreach care for these migrants.

Sister Christine Garcia, whose smile is forever imprinted on our tour group’s memory, is volunteer of the Migrant Resource Center, which greets migrants who have either made it to the Mexico–U.S. border or been deported to return home.

Working through the Roman Catholic order of the Sisters of Notre Dame, this migrant ministry house is a mission partner of Presbyterian border ministry Frontera de Cristo the PC(USA).

“I feel very proud to work here,” Garcia says. “We work to be a strong voice, to stand in solidarity with all people who come to us, regardless of nationality.” 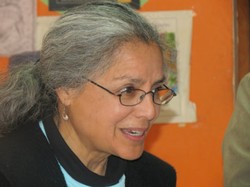 Sister Christine Garcia is a warm and welcoming presence on the >Mexico side of the U.S. Border in Agua Prieta. —Paul Seebeck

A space for compassion

Two women — one on the northern border of Mexico facing the U.S., the other on Mexico’s southern border with Guatemala — each witnessing the plight of thousands trying to escape poverty and violence, have carved from this crisis a space for compassion.

Crossing mountains and desert, either to find a better life or to be reunited with family members, these migrants are in grave danger.

“A U.S. woman came to our door for help,” says Martínez. “She’d been drugged in Central America, raped, and was pregnant. We got her back home, so she could have her baby there.”

Both of these women are lit up with joy as they do the work of extending radical hospitality. When these women walk into a room, people are drawn to them. It’s an attraction that is difficult to explain, until you see them with the weary souls for whom they are a “home” along the way.

Editor’s note: Next week we’ll hear from voices along the border and beyond, in Guatemala and El Salvador.