Muslims stand with Christians against attacks on churches in Niger 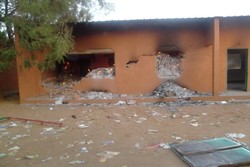 On January 16 and 17, in response to satirical cartoons of the Prophet Mohammed published in France, extremist elements in the West African country of Niger destroyed churches and Christian homes and businesses in the capital, Niamey, and the regional capital, Zinder. In all, more than 50 churches of various Christian denominations were burned. Dozens of Christian families were left homeless. The PC(USA) partner in Niger, the Evangelical Church in the Republic of Niger (EERN), lost five church buildings, two manses, and homes belonging to a half dozen member families.

Although the government of Niger at first appeared slow to prevent the attacks, it has strongly denounced the violence. The President of Niger, Mahamadou Issoufou, asked this of his country’s people: “What have the Christians of Niger done to deserve this? Where have they wronged you?” In the aftermath of events, the president met with Christian leaders and promised government assistance in rebuilding churches and ensuring their continued safety and security.

The EERN runs several primary schools as well as a health facility, and although some were also attacked, local Muslim residents came out to protect them. In an incredible show of solidarity, many Muslims stood up to safeguard churches in their neighborhoods and to shelter Christians who were physically threatened. Although a small group of people took advantage of the political and religious climate to perpetrate these acts, the overwhelming majority of Niger’s population seems shocked and saddened.

In the fall of 2013, the Rev. Sani Nomaou, then President of the EERN, came to the U.S. as part of the PC(USA)’s International Peacemaking Program. He visited churches and presbyteries in New York, Virginia, and Minnesota, speaking about the EERN’s efforts to build peace in Niger.

In response to the January attacks, Nomaou told BBC radio: “I call on every single believer in Niger to forgive and forget, to love Muslims with all their heart, to keep up the faith, to love Christ like never before. I implore believers to see all Muslims in Niger as our brothers and sisters. I am saying this with tears on my cheeks. Although it is painful, and what we are experiencing is really difficult, we are God’s children. We must love our persecutors. We must welcome them into our houses, give them food when they are hungry, give them a drink when they are thirsty. We are called to be different. We are people of peace. Let no one seek revenge. God will strengthen us in this difficult time. Muslims in Niger, we love you with the love of Jesus Christ.”

Not long after these events, on the weekend of February 6, Niger faced another serious threat to its peace and security when the Nigerian militant group Boko Haram attacked Niger for the first time, striking the far eastern city of Diffa. In response to the attack, Christian families quickly fled, fearing for their safety. The EERN was able to safely evacuate all of its members from Diffa, as the military of Niger began a campaign to fight off Boko Haram, and has found temporary refuge for them on church grounds in the central city of Maradi.

The Presbyterian Church (USA) has three mission co-workers currently in Niger, who are in safe locations and are being well cared for by EERN.

“We ask Presbyterians to join the EERN as they pray and work for peace in Niger, together with their Muslim neighbors,” said Debbie Braaksma, who heads PC(USA)’s Africa Area office. “We appeal for support, to help rebuild burned churches, and to care for those who have been forced from their homes due to the violence.”

Support can be given through the Presbyterian Mission Agency. To give, go here: https://www.presbyterianmission.org/donate/E051746/