Home News Hope — but then horror

Hope — but then horror

For some seeking a better life, the path to the United States can lead to unspeakable terror and suffering.

Children at a school run by a PC(USA) mission partner wave flags of welcome to group traveling with Voices from the Border and Beyond. —Paul Seebeck

This is the fifth article in the series “Voices from the border and beyond.”

Our group of 15 Presbyterians traveling on the Voices from the Border and Beyond (Jan. 23 – Feb. 1) seminar is greeted by Salvadoran children singing — and waving U.S. and Salvadoran flags.

We have arrived at a school run by the Reformed Calvinist Church of Salvador, a mission partner of the Presbyterian Church (U.S.A.). Highland Presbyterian Church in Lancaster, Pa., helped build the school, through connections with Marcia Towers, a former PC(USA) mission-co worker in Guatemala who also spent a year in El Salvador as a volunteer. 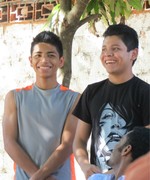 Salvadoran high school students welcome the opportunity to volunteer at an after- school program, as a way to protect themselves from the pressures of local drug and gang activity. —Paul Seebeck

At the school, we hear and see hope: Children from high-risk neighborhoods excited to learn. Parents thrilled that their children are safe. And teens volunteering at an after-school program.

“Young people are vulnerable,” especially to the overwhelming presence of gangs, says one of the volunteers, Steven Adonay Tejada Chicas. But, he adds, “we’re looking for opportunities that have activities for us and give us a chance to give something back.”

Our joy in recognizing the impact of our Presbyterian mission co-workers and their partners on the lives of these children, teens and their families is palpable. But the mood quickly shifts when we hear the stories of two women who live in this neighborhood.

A trip leads to trafficking

The two women are still suffering from what other humans did to them as they tried to make their way through Central America to reach the Mexico-U.S. border.

The women want us to tell their story — asking only that we not use their real names. So for this story, they will be “Ana” and “Maria.” In their own words, they give us a glimpse inside the world of human trafficking, of what happens when people are treated like property and turned into slaves to be used for labor or sex.

Their saga began five years ago. As Ana explains: “I was talking to my close friend and neighbor [Maria] about how easy it had been for my sister and me to cross over, how she had borrowed the money that we had each agreed to” — $5,000 apiece — “to pay a ‘coyote.’ But within a couple of months, I was deported.

“My friend and I decided that we should try to go to the U.S. together. She had a friend that promised to help us. We met someone en route who said he could get us all the way to Houston for $2,000.

“Our journey started out well. We made it across the Guatemala-Mexico border, into the central part of Mexico. We met up with two guys who we boarded the train with, along with a Mexican woman who had become a friend.”

But then, she says, the journey turned perilous.

“When we got off the train, we were kidnapped. They took the three of us to a small apartment, where they started abusing the woman from Mexico.

“She fought back — and right in front of us they killed her.”

The killing left Ana and Maria terrified that the same fate awaited them.

“We were so afraid after that. They drugged and raped us. They did unspeakable things to us.

“They even made us call the friend who was waiting for us in Houston, to try to extort money from him. They got about $500.”

After about a month, help arrived in the form of a taxi driver who stopped by.

“He basically began flirting with us,” Ana says. “We were able to tell him we’d been kidnapped against our will. I remember him saying, ‘Get in the car,’ and [me] telling him to hit the gas. As we sped away, shots were being fired — but we didn’t get hit. We spent that night with his wife and children, hiding.”

After a few days, the cab driver and his wife took Ana and Maria to a border post in Mexico, where they turned themselves in. From there they were taken to Tapachula, a Mexican town near the Guatemalan border, where a consulate agent took their statements and began processing their return to El Salvador. 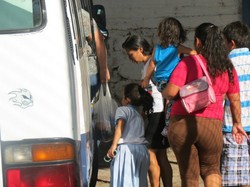 “They did unspeakable things to us,” says this woman (holding her child), who asked not to be identified. She and a friend were kidnapped as they made their way to the Mexico-U.S. border. —Paul Seebeck

Recalling the horrors of the journey, Ana adds: “There are things my family doesn’t even know about. I don’t have the courage to tell them.”

One result of the sexual abuse she suffered, she says, is that “when we finally got away, I realized I was pregnant. I didn’t want the baby.” But ultimately she decided to go through with the pregnancy and to keep the baby.

Ana says she feels lingering guilt for involving her friend Maria in the journey.

“I feel so guilty for pulling her along,” Ana says. “She was making a good home here with her three children.”

At that, Maria interjects: “I tell you, I admire you so much for how you handled the pregnancy. I would have never had the baby. I couldn’t have done it.

“It’s difficult to talk about this. Three years back in El Salvador, we’re in the process of healing. The worry about HIV is still with me. I got to the point where I was going to take my life. But God always sends angels, a kind word, a helping hand. For that I’m grateful.

“Even now, I’m in treatment. I don’t sleep well at night, thinking of the unspeakable things they did to us. In the past few months, and with the new year, I’m starting to feel a bit better, ready to move forward.”

Maria turns to her friend, with tears in her eyes but a hint of a smile on her face.

“She is my shoulder now, and I am her shoulder,” she says. “We lift each other up. Very few people know our reality.”

For instance, Ana says, “Those men — they left me with a sexually transmitted disease.”

And again Ana alludes to the guilt she feels about involving Maria. “It’s partly my fault that she has to undergo AIDS testing, to see if she is HIV positive. So far, all four tests have been negative.”

The women remain haunted by the horrors they endured.

“I’ve had a hard time sleeping. Talking with psychologists — I was telling them I no longer wanted to live,” Ana says. “But I’m so glad I didn’t terminate the pregnancy. I take my daughter with me now, wherever I go.”

She says her attitude toward seeking the good life in the United States has changed dramatically.

“When women here talk about going to the U.S., I tell them: ‘No, what you are going to do is stay here with your children. It’s better, I think, to be in your homeland, even if you must live humbly and simply.’

“I always say now, ‘It’s not worth looking for the American dream.’”

Editor’s note: Mission co-worker Kristi Van Nostran in El Salvador contributed to this story. Her work will be profiled next week in our final story in this “Voices from the border and beyond” series.