New Book Explores the “Fierce” Side of Mister Rogers 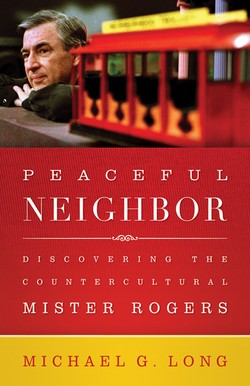 Fred Rogers is not usually thought of as fierce or radical; he has been restricted to the realm of entertainment and children, and been ripped out of his political and religious context. In Peaceful Neighbor: Discovering the Countercultural Mister Rogers, Michael Long explores how Rogers, an ordained Presbyterian minister, used his children’s program as a platform for sharing countercultural beliefs about caring nonviolently for one another, animals, and the earth.

“The popular image of Fred Rogers . . . separates him from his faith-fueled pacifism and progressive politics as well as from the historical context in which he shared his treasured convictions,” Long writes. “The result is that Rogers often appears benign, anemic, even ‘namby-pamby.’” Rogers, Long reveals, is actually a far cry from that “namby-pamby” image. In fact, Rogers opposed all U.S. wars in his lifetime, countering the attitudes, policies, and practices of a political society poised to kill through letters, sermons, interviews, books, and his popular television show. Mister Rogers’ Neighborhood, it turns out, is far from sappy, sentimental, and shallow. It’s a sharp political response from one of the most underappreciated peacemakers in U.S. history.

Michael G. Long is an associate professor of religious studies and peace and conflict studies at Elizabethtown College and is the author or editor of several books on civil rights, religion and politics, and peacemaking in mid-century America.