Home News What’s in a word?

What’s in a word? 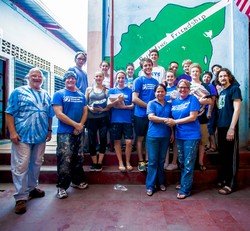 Imagine having one word to describe yourself.

You want that word to speak to the human desire for authenticity and meaning—and about your deep-rooted, globally connected community.

What would that word be?

Rev. Jeanie Shaw, a new worshiping community leader and a member of the Presbyterian Disaster Assistance (PDA) national response team, has been thinking about this.

How to describe a house church that outgrew her living room and backyard?  How to speak about what they see and feel?

“We have been called to remember the body of Christ,” says Shaw. “When we do this, we try to remember communities we know that have been devastated by disaster.”

It is during this ritual time of remembering and sharing a meal, worship, and communion—around a table at Grace Presbyterian Church’s fellowship hall—that they hear Natalie’s story.

Her mother is addicted to drugs, she’s putting herself though college.  “I believe I’ve found a faith community,” she tells them, “and I want to be blessed with this new life I see.”

Then Ed, who’d been invited to come with his friends, begins to talk—suddenly he is crying too at the realization that, like Natalie, he wants to be baptized.

“We’ve only been meeting at Grace for 13 weeks, we haven’t even had our grand opening yet,” says Shaw, “but we’ll have two adult baptisms on Easter morning.”

Shaw says she formed her new worshiping community, with support from the Sacramento Presbytery, to bring “new energy” into the church.

In February of this year, Shaw returned from an Eventide-sponsored mission trip with youth from five churches in her presbytery to Nicaragua.

Working alongside a Presbyterian Mission Partner, they helped paint a school in three days.

“The school couldn’t afford to buy the paint,” says Shaw, “but the parents of the children were so deeply grateful, it was extraordinary.  It seems that kind of gratitude always comes with tears.”

When people heard they were coming in April, one woman started to cry.

“She was overwhelmed, from getting the runaround from insurance companies,” says Shaw.  “She was deeply grateful that we hadn’t forgotten them.”

Shaw says she hears it all the time.

“You Presbyterians keep showing up, you’re still here,” says Shaw.   “Those of us who go on the mission trips are constantly transformed by the grace of serving.”

Shaw remembers taking a sabbatical during her years of ministry, traveling to Calcutta, India, as a young pastor in the 1980s.

“I knocked on Mother Teresa’s house,” she remembers, “then asked the nun at the door if I could serve.  She looked at me and said, ‘Aren’t there any poor people in Sacramento, California?’ “

There was nothing Shaw could say.

But she stayed to serve for three months before returning home with an even stronger desire to live out her passions.

“I was raised with a deep yearning for the love and hope for Jesus,” she says, “and I wanted to share that with new people through the church.”

And after starting a new church development in Windsor, California, that became a chartered congregation, and serving as an associate for a community NCD in Sacramento, she is at it again, creating something new.

What Eventide does is organize and lead mission trips for Sacramento Presbytery to Presbyterian-connected mission.

“Only 16 percent of the people in Northern California go to church,” says Shaw. “So we’re making a lot of connections with those who are spiritual, but not religious.”

“Yet we’re discovering together that we were created for communion—for meaningful relationship with each other—and God.”

“Our worship, everything we do flows out of this.  We’ve created a one-word mission statement.”