Thanks to partnership with PDA, Ferncliff will expand its “healing camp” ministry for survivors of school gun violence. 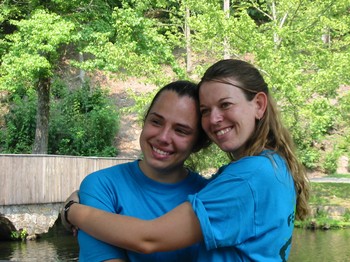 Students from Westside and Columbine gather at Ferncliff for healing camp— as survivors of mass school shooting comforted by one another, and perfect strangers saying to them, ‘you are in pain, I am with you.' —Kay Danielson

Since 1998, after a mass shooting occurred in their community at Westside Middle School, Ferncliff Camp and Conference Center has hosted numerous healing camps for children and youth affected by school gun violence.

““People stopped saying, ‘I know how you feel,’ and ‘It’ll be okay,” remembers Jessica Odom.  She was 13 when the Westside shooting occurred. “People started saying, ‘You are in pain,’ and ‘I am here for you.’

“The experience at Ferncliff made me a different person not only at the end of that week, but for the rest of my life.”

Now, thanks to a partnership with Presbyterian Disaster Assistance (PDA), Ferncliff will expand its healing camp ministry by hosting a Responding to School Violence conference April 7-9 in Little Rock, Arkansas.

Camp and conference leaders, from around the country will learn from survivors of mass school shootings how to host "healing camps" should school gun violence happen in their area.

“Ferncliff has helped so many youth address their trauma,” says PDA coordinator Laurie Krauss. “Their service to the church in helping youth build community and resiliency is invaluable. We're excited to partner with them, in this way. "

As part of the partnership camps that send representatives to the conference will become part of a network PDA will turn to when school violence occurs.

“This will prepare our camps to respond to these unspeakable acts of violence should they happen in their part of the country," says the Presbyterian Mission Agency’s Brian Frick, Associate for Camp and Conference Ministries."

" It will also help them understand more deeply the trauma kids are experiencing, and the deep impact our ministries can have on them."

Like Sara who was 11 when the Westside shooting occurred.

“When you witness such cruelty at such a young age, it is easy to believe pain and violence are the only things that exist,” she writes.  “I thank you [Presbyterians] from the bottom of my heart for showing our community that love truly is stronger than hate.”

After that first healing camp, Westside Middle School students encouraged Ferncliff to invite other survivors of mass shootings to ‘their camp’ after the violence occurred.

So began a series of camps at Ferncliff that grew to include students from Columbine, Paducah, Los Angeles, and New York City after 9/11—other places traumatized by violence.

“It’s exciting to use these experiences of Ferncliff with the resources of our camp and conference centers in this way,” says Frick. “It’s truly a God thing.”