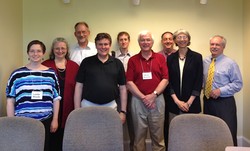 As Presbyterians in the United States file their annual tax returns, the Presbyterian Church (U.S.A.) Advisory Committee on Social Witness Policy (ACSWP) has asked the church to reflect on how the tax system works and to consider improvements to the tax code recommended by the General Assembly. A recent report by the group, “Tax Justice: A Christian Response to a New Gilded Age”, provides a framework for engaging in discussions about the large and growing concentration of income and wealth in U.S. society and about the tax structure as part of an agenda for addressing economic inequities.

The study looks at the U.S. tax system through the lens of five principles built on General Assembly policies: progressivity in allocating the tax burden across households at different wealth levels, transparency that fully informs democratic decisions, social solidarity supports our life together as a community, ecological and fiscal sustainability that take a longer term view of systems that fuel the economy, and adequacy in raising revenue to fund appropriate and necessary government activity.

Following is the ACSWP report summary delivered by Steven Webb, which includes recommendations for each principle:

1.) Progressivity measures the extent to which those who have lower incomes pay less in taxes as a percentage of their income as well as in absolute amount. Correspondingly, those with higher incomes are called to pay a higher share of their income. Achieving progressivity is an objective of Christian charity and one way to begin redressing the ongoing upward redistribution that has widened the gap in income and wealth.

Constructing a progressive tax system includes more than applying graduated tax rates in the federal personal income tax. Although progressivity there—modest by international standards—it is offset by regressive features elsewhere in the system. The current tax code allows for higher income households to disproportionately allocate income and investments as tax exempt. These sources include college saving, retirement and life insurance accounts, and income from capital gains, stock dividends and state and local bonds. Additionally, investment income is generally taxed at much lower rates than payroll and other employment taxes.

High-income households also benefit from opportunities to deduct expenditures on mortgage interest, local and state taxes, and charitable donations, including but not limited to the charitable activities of churches. While some expenditures have wider social benefits, there is no reason for the government to use the tax system to give greater percentage subsidies to these expenditures from high-income households. Deductions and exemptions for these should be capped or phased down more strongly as incomes rise. For truly socially productive outlays, low-income households should receive tax credits to equalize the incentives. Only 25 percent of tax payers itemize, so that most persons giving to churches are not motivated by deductions.

The pension portion of the social security tax is collected only on salaries up to 117,000 at present—if this cap was eliminated, social security would become fairer as well as more financially sustainable for the future.

2.) Transparency identifies the burdens and benefits of society and makes clear how each citizen is sharing in them.

The present complexity of the tax code is an indication of the lack of transparency, which can be exploited to avoid paying a fair share of the costs of our national life. Tax breaks for special interests are buried in thousands of pages of tax code and administrative rulings. The U.S. should follow the example of other countries and publish annually a list of all exemptions and subsidies in the tax system, along with accurate estimates of the cost of each to the budget. This cost is passed along through reduced public services and increased tax burdens on companies and household that do not benefit from the exemptions and deductions.

Simplicity is hard to achieve in a complex economy. The Tax Justice report itself is substantial. Though its recommendations are straightforward, the careful background documentation required of a prophetic statement takes more than 25 pages. Yet the commissioners voted for it 425 to 170 after a serious debate that included discussion of the differences between tax avoidance (legal though not necessarily moral) and tax evasion (illegal).

3.) Solidarity underscores the principle that society depends upon mutual support for the benefit of all.

We should not pay only for what we individually need. We need also to raise resources for what we as a community need and will share as public goods.

International solidarity with other governments requires that we continue to lead in going after income and assets hidden in tax havens and that we eliminate provisions in our own tax laws that allow firms operating in developing countries to avoid taxation there.

Small percentage taxes on international financial transactions could also help assure that when money flows into a country, it will stay long enough to support some real development. Based on the General Assembly action that called for the Tax Study, the Presbyterian Mission Agency Board authorized denominational programs to participate in the international movement for tax justice.

4.) Sustainability grows out of the biblical stewardship ethic which sees all of creation as God’s gift to be used and safeguarded as a trust.

Resources should be managed for the common good and the protection of the environment. That means a tax system that provides green incentives, reduces waste and encourages investment and charitable giving for community benefit and protects future generations from health and climate risks.

The tax-system support for charitable giving needs to have tighter definition so that it does not go primarily for private benefit of donors and their friends, including political donations to political action committees (PACs). To respect the above progressivity goal, deductions from taxable income should be capped or the deductions converted to tax credits available to all income levels so the rich don’t benefit disproportionately from these tax expenditures.

Although an excessive aggregate public spending would be a problem and the allocation of spending in the U.S. could be more efficient, state and local governments in the U.S. spend a smaller share of GDP than in most advanced economies.

This is part of the reason why our crime rates are higher and our average health and education outcomes are lower. We need a tax system that produces enough funds to support flourishing human and natural life and that ensures full and fair collection. Attacking any measure that raises revenue and then forcing corresponding cuts on any spending except on military and police weakens our government and society, and undermines even the private sector and the value of private consumption.

In poorer countries, the lack of international tax standardization allows for more corruption, as does competition among jurisdictions offering lower taxes and higher secrecy. The tax study team included experts in international tax law, investment management, economics, accounting, social witness, and public theology. As an economist myself, I think the report provides a credible basis for our church’s justice advocacy, and solid values arguments for those in the secular world.

How we raise public revenues as well as how we spend them should reflect our moral values as Presbyterian Christians.

Steven Webb worked as an economist for the World Bank and has taught economic history. He continues to consult on matters of international development. A member of the United Christian Parish of Reston (VA), Webb was recently elected to the Advisory Committee on Social Witness Policy.

For the full report, please see Tax Justice: A Christian Response to a Second Gilded Age