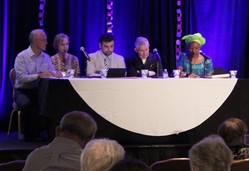 Panel discussion on the churches' response to systems of exploitation, moderated by David Schilling (far right) with the Interfaith Center on Corporate Responsibility. —Rick Jones

The 13th annual Ecumenical Advocacy Days gathering in Washington, D.C., recently brought together more than 1,000 members of the Christian community, including 200 Presbyterians, to tackle some of the most challenging social justice issues facing churches today. Attendees looked at human exploitation, corporate greed, prison privatization, racial injustice and more. While the various forms of exploitation vary, the consensus from attendees was the same: the world needs to change.

During the Sunday plenary, “The Church’s Response to Systems of Exploitation”, a panel of social justice advocates shared experiences regarding differing forms of exploitation. All speakers carried a common theme—the great divide between the wealthy privileged and those without financial means.

“Financial institutions like the World Bank and International Monetary Fund are reinforcing the need for people to jump on rickety boats to try and find a better life,” said Emira Woods, Global Client Principal for Social Impact Programs at ThoughtWorks. “These institutions don’t have to deal with incarceration but have full freedom to exploit workers, environments and communities.”

Woods’ comments came upon hearing about the latest boat tragedy on the Mediterranean Sea that left hundreds of Libyan immigrants dead. She added that the world must demand new economic models that put the people and planet first instead of creating an environment that forces men, women and children to pay the price.

Fr. Shay Cullen is founder of People Recovery Empowerment and Development Assistance Foundation in the Philippines. He described the horrific conditions facing women and children who are part of a massive human trafficking operation.

“Children are taken to so-called ‘Houses of Hope’ which are no more than cages,” he said. “They are forced to work the streets as beggars or drug couriers or are tortured and killed in violent child prostitution rings.”

Cullen estimates 4.5 million people around the world are suffering various forms of trafficking. He said it is hard to get justice when there is so much corruption.

Mass incarceration has reached critical levels in Brazil, with the third largest prison population in the world, according to Joanne Blaney, a Maryknoll lay missioner in the country.

“Eighty percent of those arrested are charged with property crimes and minor drug offenses,” she said. “They sit in jail three or four years awaiting trial for a crime that carries a three to four month sentence.”

Blaney said there are instances where as many as 60 inmates share a cell designed for eight, while family members are forced to undergo invasive strip searches when visiting the prisons.

Blaney attributes the overcrowding to prison privatization saying the more inmates behind bars, the higher the profits for companies running the facilities. She added there is a growing number of female inmates charged with participating in the lowest levels of drug trade.

The human rights violations in the Middle East were a part of the panel discussion.

“We are witnessing a new phenomenon in refugee camps,” said Raed Jarrar, policy impact coordinator for American Friends Service Committee in Washington. Born in Iraq, Jarrar, now a US citizen, saw firsthand the atrocities faced by displaced citizens. “Hundreds of thousands of people are placed in the camps and are not allowed to leave, not because they are prisoners, but because they are refugees.”

More than six million people in Iraq and seven million in Syria have been displaced in the last few years, according to Jarrar. He called mass incarceration in the Middle East messy and violent, with a rising number of political prisoners facing hard time.

“We must regain our reputation and leverage by stopping this mass holding of political prisoners,” he added. “If we don’t fix the problems we have here in the US, how can we go to other countries to help them?”