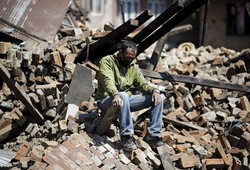 The 7.8 magnitude earthquake hit Nepal on April 25 and is considered the worst in more than 80 years. —Adna Abidi

The death toll from this past weekend’s devastating earthquake in Nepal continues to rise, closing in on 4,500. Rescue and recovery efforts are being hampered by the damage from collapsed buildings, landslides and aftershocks. Some villages and small communities have been virtually wiped out by the 7.8 magnitude quake, the worst in more than 80 years according to government officials.

The government of Nepal has declared a state of emergency, saying rescuers are still not able to reach some villages with needed food, water, blankets and medicine. Gathering information from the areas is a particular challenge. Ground transportation is hampered by debris in the roadways, and there are few helicopters to transport goods.

The quake struck on April 25 just west of the Nepali capital of Kathmandu and caused avalanches around Mount Everest. At least 20 hikers are known to have died, and dozens more injured, when an Everest basecamp was partially buried, according to government officials.

“Forty of the 75 districts in Nepal have been affected, some of them severely, especially in the central and hilly regions,” said Nirmal Singh, head of emergency for CASA (Church’s Auxiliary for Social Action). “Hospitals are near the breaking point with a rush of the injured, and some families lost more than one member in the calamity.”

Singh told Presbyterian Disaster Assistance staff that the powerful aftershocks on Sunday sent people scurrying into open fields, streets and school buildings. One tremor, he said, lasted more than 30 seconds and could be felt in India and Bhutan.

“Rescuers have been hunting for survivors under heaps of debris with bare hands as well as with heavy equipment, though the efforts have been hampered by fresh tremors, thunderstorms and snowfall in the mountain ranges,” he added. “With electric poles and lines uprooted, most parts of the country have no electricity, and authorities say the situation is likely to continue for the next few days.”

Meantime, PDA is working with its partner in the region, ACT Alliance, whose members are already on the ground in Nepal, to meet immediate needs such as food, water and other supplies.

“As long-term recovery plans are developed, PDA will accompany and further financially support our partners in the area to ensure a comprehensive recovery is sustained,” said Laurie Kraus, PDA coordinator.