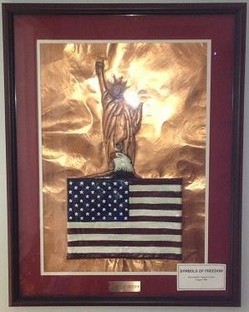 “Symbols of Freedom," bas relief on copper by Clyde Carter.

Living River, near Birmingham, Ala., is the newest of 156 camps and conference centers related to the Presbyterian Church (U.S.A.) It is run by people who believe in its mission and are willing to be creative when it comes to funding.

In its most current fundraising endeavor, the Presbytery of Sheppards and Lapsley, which owns Living River, is conducting an online auction of a piece of artwork donated to the camp by renowned copper artist and Presbyterian minister Clyde Carter. Titled “Symbols of Freedom,” the work features the Statue of Liberty, an eagle, and an American flag in bas relief on a sheet of copper.

The theme of “freedom” resonates deeply with 84-year-old Carter, who was a Freedom Rider in the early 1960s during the Civil Rights movement. Like other African Americans of his generation who grew up in the deep South, he recalls the sting of not being free to attend certain schools or drink out of water fountains that were designated for “whites only.”

Segregation “was like a restraint on your spirit,” he says.

Now Is the Time

Carter, who has artwork on display at the Birmingham Civil Rights Institute and at the Rosa Parks Museum in Montgomery, donated “Symbols of Freedom” more than a decade ago in response to a presbytery-wide appeal to pastors. He thought it could be sold to support development of the new camp.

“I had no clue how to sell artwork,” says Robert S. Hay, Sheppards and Lapsley’s associate executive for nurture, who was overseeing the creation of Living River. So the presbytery held on to Carter’s gift—until now. The release of the movie Selma and high-profile observances of the 50th anniversary of the march from Selma to Montgomery have jump-started plans to sell the piece of art.

The timing is “a God-thing,” says Benga Harrison, director of development for Living River. “It was like all of a sudden the perfect storm came together. We thought, ‘Now is the time.’”

The publicity generated by the sale of Carter’s art could be even more significant than the money, Hay believes. “For me, it’s the opportunity to tell the Living River story in an arena where we haven’t told it before.”

The camp is already on the radar screen of environmentalists because of its location on the Cahaba River, one of the most wildlife-diverse rivers in North America. “There are a lot of people watching us to see how good a steward of this river are we going to be,” Hay says.

In fact, environmental education will be a key aspect of the camp’s mission and sustainability, Hay adds. Following its first summer camp season, which kicks off in June, Living River will begin hosting a steady stream of school groups at the Cahaba Environmental Center. The pilot education project is being managed by Camp McDowell, an Episcopal camp, in partnership with Living River.

Hay hopes that publicity around Carter and his art will extend the reach of the camp even further—beyond church members and environmentalists to people interested in the Civil Rights movement. He envisions Living River hosting out-of-town visitors to museums and historical sites in Birmingham, Selma, and Montgomery, which are all within an hour’s drive of the camp.

The donating artist’s vision for the camp springs from his own compelling faith story. Carter says he hopes Living River will offer “a means for young people to develop in their faith and go on to be servants of Christ.”

Carter grew up in Birmingham, right down the street from what was then Miller Memorial Presbyterian Church. His parents were not church-goers and never took Carter to worship or Sunday school, but as a boy he was fascinated by the church down the street.

“I would sit on the porch at night watching the stained glass windows and listening to the music—and I was drawn to it,” he says.

Once in elementary school, Carter was asked, “What do you want to do when you grow up?” He responded, “I want to be a minister.” He says he can’t fathom what gave him the idea— “That’s just what came out of my mouth.”

As a teenager, Carter visited the church down the street, and the congregation’s youth director reached out to him. Involvement in Miller Memorial’s strong youth program led eventually to enrollment at Presbyterian-affiliated Johnson C. Smith College and Seminary, both located in Charlotte, N.C., at the time, and to ordination as a Presbyterian minister.

But first, to escape the stifling effects of segregation, Carter took a four-year detour after high school and joined the U.S. Navy. He spent most of his military service on ships in Asia.

Halfway through his tour of duty, Carter had a vivid experience that confirmed God’s call to the ministry. One day, while stationed in San Diego, he heard an inner voice telling him to go to a nearby park. He obeyed.

“I sat on a bench for a little while. Then I got up and walked over to a bridge, and the words came to me: ‘the ministry.’” The thought reminded him of his unexpected childhood declaration, “I want to be a minister.”

“Even though I’d forgotten, God had not,” he says.

Joining the Struggle for Racial Justice

Ordained in 1964, Carter served as pastor of Westminster Presbyterian Church in Birmingham in the late 1960s. His immediate predecessor there was John Wesley Rice Jr., the father of former U.S. Secretary of State Condoleezza Rice, who grew up in the Westminster congregation. Carter spent the bulk of his career—23 years—as a hospital chaplain at the VA Medical Center in Birmingham.

Even before he was convinced God was calling him to the ministry, Carter felt compelled to join the struggle for racial justice. When he left home in 1952 to join the Navy, he says, “I swore I would never come back to the South.” But gradually his mind changed. “I felt I needed to come back to try to make things better.”

His opportunity came in 1961 when the first group of Freedom Riders passed through Charlotte, where Carter was attending college. Organized by the Congress on Racial Equality and trained in nonviolence, the Freedom Riders bought tickets on interstate buses bound for the deep South. They protested segregation by sitting at the front of the buses and entering restrooms or other facilities designated for “whites only.”

Inspired by meeting with the Freedom Riders, Carter and another student, Charles Jones, joined a group traveling from Atlanta to Montgomery in May 1961. The group included Baptist minister Ralph Abernathy, co-founder of the Southern Christian Leadership Conference, and William Sloane Coffin, a leader of peace and civil rights movements who later became pastor of New York City’s Riverside Church.

Carter and the others were arrested at the bus station in Montgomery when they tried to buy tickets at a window designated for “whites only.” They spent a week in jail.

In May 2011, Carter and more than 170 surviving Freedom Riders were guests on a segment of the Oprah Winfrey Show commemorating the 50th anniversary of the Freedom Rides. A highlight of the show for Carter was meeting congressman and veteran civil rights leader John Lewis, who spoke about being attacked by police while trying to cross the Edmund Pettus Bridge in the incident now known as Bloody Sunday.

The infamous bridge is the subject of one of more than 100 pieces of copper art created by Carter since his retirement in 1997. He says he hopes to give the piece to Lewis. He has also done a series depicting the 1963 bombing that killed four African American girls at Birmingham’s 16th Street Baptist Church.

Carter’s donation of artwork to Living River is an example of the tremendous support the camp has received, says Hay. People throughout the presbytery—laypersons in particular—have invested their time, money, and leadership in the creation of this new camp, which replaces two previous camps that closed years ago because they were no longer viable.

“It’s been a rallying point for the presbytery,” Hay says.

“Camps are closing all over,” says Harrision, “and yet this presbytery has felt a strong call from God to do this.”

Brian Frick, associate for camps and conferences for the Presbyterian Mission Agency, agrees.

“What excites me about Living River,” he says, “is the way it inspires the congregations of Sheppards and Lapsley Presbytery. At a time when many are wondering what the future holds, this building of a camp says that kids are important, retreat is important, young adults are important.  It says we are going to invest and get out of our normal ways of being church and get back into the inspirational, foundational, and transformational ministry of camping.”

Frick sees Living River as something of an anomaly, because it is one of only two new camps built in the PC(USA) in at least 25 years.

“There are things you can do with camping ministries that are just not possible in the church context but are deeply enriching to the life of a congregation,” Frick observes. “In a time of decline and closing, a time when we are closing more ministries than we are starting, it says something about the faith and vision of the body of Christ in Sheppards and Lapsley Presbytery that they are willing to step out and lead in such an important way.”