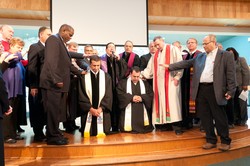 Amgad Megally (left) and Amir Tawadrous (right) kneel as elders and community members lay hands on them during their ordination service. —Ric Cummings

When considering the contemporary Middle East, images and tales of war, strife, poverty, dislocation and suppression of religious and civil freedoms dominate the daily news cycle. Yet beyond this turmoil, the Middle Eastern Ministries of the Presbyterian Church (U.S.A.) is working to ensure Christians from the Middle East are equipped to minister to new and existing congregations in the U.S.

A recent event highlights the efforts of this three-year collaboration, joining presbyteries in the U.S. and Egypt for the purpose of authorizing ministry and engaging mission to Middle Eastern communities in the U.S.

Delegates representing two denominations met in celebration of a milestone for two Egyptian ministry candidates when Amgad Megally and Amir Tawadrous were ordained by the Delta Presbytery and the Synod of the Nile in Egypt Saturday, March 28, at Grace Covenant Presbyterian Church in Overland Park, Kan. Pastors from Grace Covenant, Rolling Hills, APF and the Synod of the Nile presided over the service of ordination.

The Arabic Presbyterian Fellowship, a spiritual and social ministry designed for Arabic-speaking people in Kansas City, is supervised by the Heartland Presbytery of PC(USA). The APF aims to meet the spiritual needs of its congregation by providing worship services, counseling, social activities and even assistance for immigrants and refugees from the Middle East.

Jonas Hayes, pastor at Grace Covenant Presbyterian Church and an APF Administrative Commission member, says Megally’s ordination significantly benefits APF’s growth, both in its congregational numbers and in its outreach to other Christian Arabs living in the Kansas City metro area.

“Amgad’s ordination makes this ministry more visible to the community as a whole because there’s more emphasis placed on ordination,” he says. “It adds credibility to the ministry, and it shows he has received his required education – he’s successfully met the requirements to be recognized as an ordained minister.” 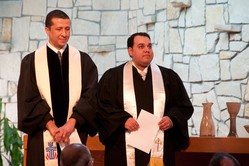 Hayes says the academic rigors on the path to ordination make Megally’s accomplishment even more remarkable. “I didn’t think I would experience this in my lifetime,” Hayes adds. “Amgad is such a wonderful, kind, thoughtful spiritual leader.”

Magdy Girgis, the PC(USA) Racial Ethnic & Women’s Ministries field staff for Middle Eastern Ministries and a board-certified chaplain at Vitas Hospice Care in Los Angeles, Cal., was present at the ordination. He highlights the ordination as an important change from an era when the model of mission work was one that trained and sent people from the “first world” to serve in the “third world.”

“The Synod of the Nile believes their mission is to the whole world – that they are preparing ministers to go any place to do ministry,” says Girgis, noting Middle Eastern worshiping communities are one of the fastest growing ethnic groups in the PC(USA), in part, due to immigration. “We are there as immigrants arrive – to hold them, to give them the resources they need and to ask them to participate in the new community.” 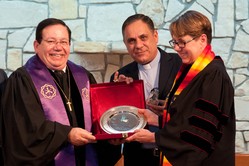 “I've been waiting for this event many years since I've said yes to the spiritual calling,” says Megally, who hopes his ordination will deepen his relationship with God and “open new doors in American churches.”

“My ordination makes official my theological and pastoral studies at ETSC (Evangelical Theological Seminary in Cairo Egypt) and work as a pastor to have authority to celebrate the baptism, Lord's Supper and ministry,” he says.

“Amgad’s ordination strengthens and moves into its next phase of mission and ministry our Arabic Presbyterian Fellowship. We were delighted to host our colleagues from the Synod of the Nile and to participate with them in the ordination,” he says. “It is another milestone in Heartland Presbytery’s desire to provide Presbyterian and Reformed experience of worship and mission to all interested people within our bounds.”

Megally plans to immediately expand the scope of AFP’s ministry, including an outreach program for new immigrants. Additionally, he has applied for an extended unit of clinical pastoral education at St. Luke’s Health System, which begins this fall.

In 2013, Middle Eastern Ministries of the PC(USA) partnered with mid councils in the development of 10 new worshiping communities, primarily Egyptian, Iraqi and Syrian. Throughout the U.S. there are more than 60 Presbyterian congregations and fellowships that worship in Middle Eastern languages, including Arabic, Armenian, Assyrian, Chaldean, Farsi and Persian.