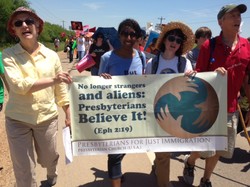 “How many of you are ok with for-profit prisons making money off the suffering and slavery of your brothers and sisters?” the Reverend Jim Rigby, pastor of St. Andrew’s Presbyterian Church in Austin, Texas, asked the crowd of about 500. “How many of you are comfortable with children being raised in a cage?”

Cheers and applause rang out as Rigby and others emphasized the need to shut down the South Texas Family Residential Center, located about a mile down the road from the center of Dilley, a rustic Texas town of about 4,000 people with a railroad track running through it.

The eclectic group that included, senior citizens, kids in strollers, pastors in clerical collars, young people, and activists converged under the umbrella of Grassroots Leadership, an organization that fights to end for-profit incarceration and reduce reliance on criminalization and detention through direct action, organizing, research, and public education.

Participants poured off tour buses from throughout Texas and gathered in the town park to hear speeches and get marching orders before trekking off en masse down Highway 85 toward the detention center. Carrying homemade posters and chanting such phrases as Sí, se puede – Spanish for “Yes, we can” – and “Shut it down,” the group was intent on getting its message heard.

“It’s the biggest immigrant detention center of any kind in the U.S., or it’s going to be when they are finished building it,” said Cristina Parker with Grassroots Leadership in Austin, Texas. “It’s a family detention center, which makes it particularly disgusting because they are holding babies and moms who are seeking asylum in this country.”

“We want it shut down, and we plan on not stopping until they do,” she said. “Obama shut family detention down once before at T. Don Hutto (detention center), which is also in Texas, and we’re just asking him to do it again.”

Only mothers and their children are housed in Dilley, as well in its counterpart in Karnes City, Texas. The majority arrive in the U.S. fleeing violence in their home countries and go directly to immigration officials to seek asylum.

An increase in arrivals of these asylum seekers last summer and an effort by the U.S. government to crack down on migration across the southern border paired with limited expansion of the judicial system to handle the increased case load, resulted in thousands being detained in for-profit centers for months on end. Further complicating the matter is the fact that the women and children are often given very high bonds.

Parker said the private company that runs the Dilley facility under contract with the U.S. government, Corrections Corporation of America (CCA), gets paid by the government $300 per person, per day for the people incarcerated at the facility. The other major corporate player in the for-profit detention business is the GEO Group, which runs a facility in Karnes City.

CCA has reported that they have already made $21 million off the families who have been locked up since they opened in December, she said. When it is complete, the detention center is expected to have 2,400 beds, making it the largest in the country.

Centers like the ones in Dilley and Karnes City have gotten considerable publicity because of reports of inhumane, prison-like conditions. Often compared to the ugly period in U.S. history when Japanese Americans were detained in camps following the Japanese bombing of Pearl Harbor in World War II, the present-day detention centers are calling into question the legality of holding those seeking safety in the U.S. and the country’s commitment to human rights.

“The detention centers in Dilley and Karnes were opened in direct response to the arrival of thousands of refugee children and families in the summer of 2014,” said Teresa Waggener, manager of legal services in the Presbyterian Church (U.S.A)’s Office of Immigration Issues. “Children and refugees are not a threat to security, and Americans are not at risk because of their presence.

“As people of God we cannot stand idly by while our country imprisons families for seeking protection within our borders,” the immigration attorney said. “We should press the Obama administration and the U.S. Department of Homeland Security to immediately close the facilities.”

Scores of Presbyterians have joined the effort to end family detention, including those at St. Andrew’s in Austin, and Northwood Presbyterian and University Presbyterian churches in San Antonio. For more information on how to help, go to pcusa.org/immigration.