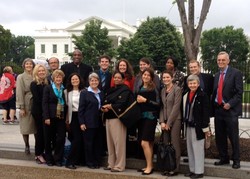 The Rev. J. Herbert Nelson II (top row, third from left) with other faith leaders expressing concerns over family detention in the U.S.

A group of 18 faith leaders met with White House Staff May 21 to call for the end to family detention, delivering a letter signed by nearly 1,500 faith leaders from around the country. These leaders join calls by a growing number of Congressional members, civil society groups and advocates to end this inhumane practice once and for all.

The U.S. government reinstated family detention in response to the arrival of 68,684 family units at the U.S./Mexico border in 2014. Currently, over 1500 refugee mothers and children from Central America are being incarcerated in three detention centers in Karnes City, Texas; Dilley, Texas; and Berks County, Pa. In 2009, the Obama administration closed the T. Don Hutto detention facility in Taylor, Texas, due to complaints of abuse and poor conditions. Advocates and those currently detained report similar abuse as well as inadequate nutrition and medical care.

A lawsuit challenging the administration on this practice was set to be resolved this weekend, but negotiations between the parties have been extended until June 12, with a final agreement expected June 19. Administration attorneys maintain that detention allows for greater flexibility in responding to surges of unauthorized migration.

Below are statements from faith groups that participated in the White House meeting:

“In the name of justice and mercy, I call on the administration to change its response to the desperate cry of refugee mothers and children fleeing violence and crushing poverty in Central America. Instead of offering protection and opportunities to pursue their asylum cases, we have locked them up en masse, replicating the trauma from which they flee. With this two-week delay on the final outcome of the court case challenging this practice, these mothers and children continue to suffer. We are a better nation than our actions demonstrate; mercy for these mothers and children ought to be our only option at this time. Family detention must end now.” — The Rev. J. Herbert Nelson II, Director of the Presbyterian Church (U.S.A.) Office of Public Witness

“As Jesuits we stand in solidarity with the mothers, infants, toddlers, children and teens being unjustly incarcerated in so-called “family immigration detention” facilities. The overwhelming majority of these children and mothers are asylum seekers who fled unspeakable violence and are searching for safe-haven within our borders. We call on the Obama Administration to end this corrosive and immoral practice immediately. These families are not flight risks, they quite obviously pose no danger to our communities. There is simply no excuse for the continued detention of mothers, children, toddlers and babies in any immigration detention facility in the United States. This shocking practice should not be the legacy of President Obama’s policy toward refugees and immigrants.” —The Rev. Timothy P. Kesicki, SJ, President of the Jesuit Conference of the United States and Canada

“Family detention conflicts with the very core of the Quaker principle to honor that of God in each person. Any policy that detains families, asylum seekers or refugees is both immoral and illegal under U.S. and international law. We believe that family detention allows private prison corporations to profit off of migrants’ desperation. We call for an end to all family detention -- it is dehumanizing and it inhibits access to legal assistance. We’ve also seen that it damages physical, mental and familial health. And, worst of all, it is completely unnecessary.” — Diane Randall, Executive Secretary, Friends Committee on National Legislation

"Over the next two weeks, Sisters of Mercy ask the Obama administration to take immediate actions to end the shameful policy of incarcerating refugee woman and children. President Obama's decision to comply or to appeal Judge Dolly Gee's ruling will determine his legacy on immigration, as much as his fight for comprehensive immigration reform and deferred action." – Sr. Patricia McDermott, President of the Sister of Mercy of the Americas.

“Many within our Disciples of Christ churches are deeply concerned about the practice of family detention, which has re-emerged in the past year as a method for housing children of all ages and mothers who have fled to the United States to seek protection from horrific violence in Central America.  Nearly all are eligible for asylum.  We have prayed, visited, and supported the spiritual care of these vulnerable populations, and continue to urge the Obama administration to turn away from the practice of family detention, which locks up children in unlicensed facilities often run by for-profit prison companies.  Instead, we urge the administration employ much more humane alternatives to detention which promote healing and offer legal and mental support and hope for God’s children.”— The Rev. Ron Degges, President of Disciples Home Missions