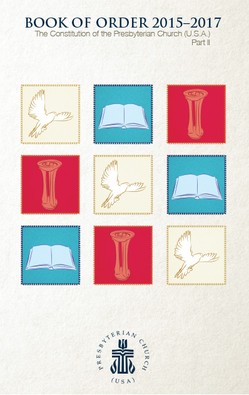 The new Book of Order (2015–2017) is now available for ordering. It incorporates seven constitutional amendments approved by the Presbyterian Church (U.S.A.)’s 221st General Assembly (2014) and a majority of the presbyteries.

The most closely watched amendment, approved by a 116–48 vote of the presbyteries, changes wording in a section in the Directory for Worship related to Christian marriage (W-4.9000). It replaces the former description of marriage as “between a man and a woman” with the following statement: “Marriage involves a unique commitment between two people, traditionally a man and a woman, to love and support each other for the rest of their lives” (Book of Order, W-4.9001).

Section W-4.9003 says a couple may request a service of Christian marriage in the PC(USA) “if they meet the requirements of the civil jurisdiction in which they intend to marry.” But Section W-4.9006 adds: “Nothing herein shall compel a teaching elder to perform nor compel a session to authorize the use of church property for a marriage service that the teaching elder or the session believes is contrary to the teaching elder’s or the session’s discernment of the Holy Spirit and their understanding of the Word of God.”

Gradye Parsons, Stated Clerk of the General Assembly, says the revised section broadens the church’s definition of marriage. “We’re saying that in the bigger church there are different views of marriage, and this amendment is about trying to find a way to live together and respect and honor each other’s views.”

Presbyterians who may have heard only isolated quotes from the revised description of marriage can now read the entire six paragraphs for themselves, says Joyce Lieberman, director for Constitutional Interpretation. “It’s helpful for folks in the church to see what wording was actually adopted.”

One of the shortest (five words) amendments in the new Book of Order adds a requirement that all church councils adopt and implement a child protection policy (G-3.0106).

“It’s a simple amendment but with profound implications,” Lieberman says.

Parsons says the amendment shows that protecting children is a priority for the PC(USA). “We want every family that brings children to church to be assured that their children are safe.”

Another amendment—part of a larger policy statement on the PC(USA)’s “interreligious stance,” strengthens the denomination’s commitment to interfaith relations (G-5.0102).

The amended section states: “The Presbyterian Church (U.S.A.) at all levels will be open to and will seek opportunities for respectful dialogue and mutual relationships with entities and persons from other religious traditions. It does this in the faith that the church of Jesus Christ, by the power of the Holy Spirit, is a sign and means of God’s intention for the wholeness of all humankind and all creation.”

Other amendments included in the new Book of Order deal with:

The Book of Order consists of four parts: The Foundations of Presbyterian Polity, The Form of Government, the Directory for Worship, and The Rules of Discipline.

The new Book of Order has a colorful cover featuring three church symbols: a baptismal font, an open Bible, and a dove representing the Holy Spirit. The design links the Book of Order—Part II of the PC(USA) Constitution—with the Book of Confessions, Part I of the PC(USA) Constitution, which also has church symbols on its cover.

“The two covers are meant to be complementary,” Parsons says.

The new Book of Order may be ordered in print, large-print, CD, and PDF downloadable versions. It is available in Spanish, Korean, Mandarin Chinese, and Braille, with select constitutional items available in Portuguese. To order, call Presbyterian Distribution Service at 1-800-524-2612 or visit the church store.