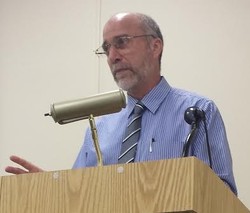 The Rev. Daniel Izquierdo Hernández, secretary general of the National Synod of the Presbyterian-Dutch Reformed Church in Cuba. —Jim Nedelka

For most of his 54 years, the Rev. Daniel Izquierdo Hernández, secretary general of the National Synod of the Presbyterian-Reformed Church in Cuba, has lived in a balmy, tropical country with a 55-year long winter in its political relationship with the United States.

During a late-morning conversation on June 23, sponsored by the United Nations’ offices of the World Council of Churches and the Presbyterian Church (U.S.A.), Izquierdo discussed the role of religion and U.S./Cuban relations with an ecumenical audience.

Izquierdo, from the city of Santa Clara located in the heart of Cuba, recalled how hints about a potential exchange of U.S. and Cuban political prisoners began circulating last fall. Experience told him there would probably be a pre-Christmas thaw; he assumed the swap would be the three remaining members of The Cuban Five for American businessman, Alan Philip Gross.

The Cuban Five were Cuban intelligence officers arrested in September 1998 and eventually convicted of conspiracy to commit espionage by infiltrating Cuban-American groups, conspiracy to commit murder, acting as an agent of a foreign government and other illegal activities. Gross, arrested in December 2009, was convicted in 2011 of espionage for bringing in satellite phones and computers for use by Cuba’s Jewish Community without proper authorization from the Cuban government.

He said the events of Dec. 17, 2014,“surprised us all.” The presidents of the U.S. and Cuba simultaneously announced a drastic shift in the two countries’ political relationship.

Izquierdo quickly caucused with his Synod Executive Team following the announcement. They were the first Cuban religious organization to issue a supportive statement; a move followed in near-rapid succession by the Cuban Episcopalians, then other denominations.

The new political landscape has prompted conversations among Cuban religious and political leaders regarding the role religious communities can play. Cuba’s Presbyterian Secretary General characterizes these talks as positive, a sentiment echoed by Rudelmar Bueno de Faria, a Brazilian who is the World Council of Churches’ representative to the United Nations.

The Presbyterian leader is encouraged by the relaxation of Cuba’s restrictive policies on religion, yet Izquierdo points out that there is still a ways to go even though the public policy pendulum has swung away from one of “there is no God so why do you need religion and churches?” to one endorsed by Fidel Castro which basically says that, “churches can exist in a Communist country.”

He would love to see the end of the current state policy barring construction of building of new houses of worship.

“Those church buildings are crowded,” he says, but adds that he is encouraged by what he sees as the faithful’s work-around to avoid the crowding, a return to “the roots of the church: people meeting and worshipping in each other’s houses.”

As buoyed as he may be by the upswing in religious faithful, Izquierdo is also realistic about the political gorilla in the room: it’s one thing for the U.S. to ease the travel ban, it’s another to lift the economic sanctions.

“It will take time. People in the State Department have cautioned that this may not be fully developed or implemented before President Obama leaves office,” he said.

Izquierdo admitted there is some concern that the U.S. Congress—the arbiter of lifting the sanctions—might drag its heels for any number of reasons, including waiting-out the 30 months remaining in Rául Castro’s presidency, waiting out both Rául and his brother Fidel, or simply because of a political gerrymandering.

Changing the economic climate would go far to the island nation lifting itself out of poverty. The fall of the U.S.S.R. cut Cuba’s economy to 25 percent of its former level.

“Eighty percent of Cubans own a house,” said Izquierdo. “Yet 60 percent of those houses are in bad shape.”

He acknowledged that Cubans must still deal with some other societal ills: combating racism against darker-skinned Cubans and improving the inadequate pay for state jobs that university graduate usually take, then abandon to seek their fortunes elsewhere.

Being a man of faith, he remains positive, saying, “Don’t let the past have the last word. I learned, when you are faithful, people will respect you even if they disagree with you.”

He learned a lot about living faithfully as a young lay pastor. In 1986, being religious in Cuba wasn’t easy—on Sundays, four elderly parishioners occupied the pews of the large church for which he was caretaker.

Izquierdo remembered, “In those days, four parishioners was considered a full house.”

One day, the young pastor couldn’t contain himself any longer so he asked the elderly parishioners, “Why, with all the empty rows, are you still keeping your house of worship open?”

He said one gentleman offered an answer, “Faith. Without faith…”

At this point, emotion got the better of Izquierdo and he couldn’t speak any longer.

His tears may not have supplied the exact ending to a long-ago parishioner’s response, but they told the story of hope that continues in Cuban Christianity.