Organizers ask: How inclusive is your church? 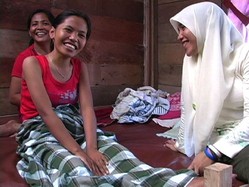 Churches of all denominations would like to think that the inclusion of all people would be a natural occurrence, says one Presbyterian minister. But that is not always the case.

“The reality is that inclusion of people with disabilities is not on the forefront of most people’s minds unless they themselves are personally associated with a disability,” says the Rev. Joanne Blair, associate pastor for inclusion and pastoral care at First Presbyterian Church of Birmingham, Mich. “Disability Inclusion Sunday reminds congregations that many people are not only denied the opportunity to participate in activities outside church walls, but are often denied the opportunity to be part of a church community.”

Blair has the distinction of the being the only pastor within the Presbyterian Church (U.S.A.) to be ordained to inclusion, in fact, that is her top responsibility as a minister. She was also recently elected to serve on the leadership team of the Presbyterians for Disability Concerns (PDC), one of the ten networks of the Presbyterian Health, Education and Welfare Association (PHEWA).

While encouraged that more churches are striving to include people of all abilities, Blair believes there is still a long road ahead to travel.

“People with intellectual and developmental disabilities (IDD) are a vastly overlooked population,” she says. “Some churches have separate classrooms/areas where people with IDD can come, and this is a start, but it still does not include them in the life of the church.”

“Rather than viewing someone as a ‘disabled person’ I would hope we would see them first as a person who happened to have a disability,” says Blair. “This simple practice of ‘person-first language’ helps us to shape our own attitudes and see each person individually with various gifts and challenges.”

Blair says people are often intimidated by persons with disabilities, feeling they don’t have the skills or expertise to be involved with them. But she adds it doesn’t take a lot of skill to be welcoming and say “hello.”

In some countries, people with disabilities are seen as non-productive with little or no value to society as a whole. In Indonesia, one young girl found out the hard way and worked for years to change that viewpoint.

On December 26, 2004, Damai saw her life change in a way she never expected. An earthquake and tsunami in the Indian Ocean devastated 14 countries, leaving 230,000 dead and thousands more homeless and injured. Damai was paralyzed from the waist down when her home collapsed on top of her as she shielded her younger brother and sister from falling debris.

Living in a farming community, Damai spent a great deal of time over the next several years in and out of the hospital undergoing surgeries and rehabilitation. During that time, she developed computer and administrative skills that allowed her to become independent and a productive member of the community.

Photojournalist David Barnhart with Presbyterian Disaster Assistance, spent several years traveling to Indonesia developing a video report card on Damai’s progress. The cultural perception of people with disabilities in her country was not very accepting according to Barnhart. Damai told him that society looked at those with disabilities as non-productive, sitting at street corners begging for money. But she wanted to challenge the perceptions about disabilities in her community, hoping to create opportunities for others to be heard.

“Every day I want to better myself,” she said. “Every day, people would see me in my wheelchair working in the office and I want others with disabilities to be motivated by that.”

“Even though some may think my accident is a curse from God, eventually I hope the community will understand that people with disabilities can lead meaningful lives,” Damai said in one of her last interviews. “I hope that overtime, as we are out in the community visiting churches and participating in local events, people will see that the disabled can go to church and enjoy the same activities as other people.”

When she first visited her church after recovery, Damai said church members were not comfortable around her and were very quiet. But, she adds that as members saw what she was capable of, they began to warm up and see that people with disabilities could still play a vital part of church life.

Blair says many people believe that engaging someone with a disability is an act of charity or giving of themselves. But she adds that people fail to realize how much richer their lives can be by building relationships and that every Sunday can and should be Disability Sunday.

The PDC, in conjunction with the Office of the General Assembly, has created a new church resource, “Better Together: Transformed by God’s Variety of Gifts.” It includes testimonies and strategies for inclusion in every setting, from worship and Christian education to employment.

Attendees at this summer’s Big Tent event in Knoxville (July 30 – August 1) can learn more about this topic at a workshop entitled “Encouraging Full Inclusion of People with Disabilities in our Congregations and Councils.” Registration is available at https://www.presbyterianmission.org/ministries/big-tent/.