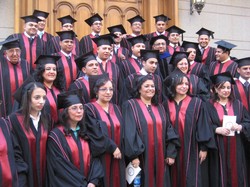 Graduates of the Evangelical Theological Seminary in Cairo. —Courtesy ETSC

Jim Davis, a member of Miami Shores Presbyterian Church in Florida, and a long-time supporter of Presbyterian World Mission, has given $1 million to support church growth in Egypt. The gift will be split between new church development and pastoral training.

“We give thanks to God for Jim's generosity,” said Hunter Farrell, director of World Mission. “We are seeing an increase in the number of individuals and congregations trusting Presbyterian World Mission to help them make a lasting difference in the world.”

“Jim's extraordinary gift enables our Egyptian partners and Presbyterian Church (U.S.A.) mission co-workers to take advantage of an unprecedented window of opportunity in Egypt to help grow the Church by training leaders at the Evangelical Theological Seminary in Cairo and by establishing new congregations around the country.”

“I believe sharing the Gospel of Jesus Christ with people around the world is the most important thing we can do as a church,” said Davis. “There’s so much strife in the world today because people don’t know about the love and forgiveness that Jesus teaches.”

The resulting change from what became known as “The Arab Spring” was rapid and deep in countries ranging from Libya to Syria. Egypt now has a new government, a new constitution and an unprecedented openness to the church’s role in society.

In places across Egypt, the government recently gave 14 parcels of property to the Evangelical Presbyterian Church in Egypt as future sites for churches and schools. The church, founded and strengthened by PC(USA) missionaries over 150 years ago and now the largest Protestant church in the Middle East, has purchased additional properties through its capital campaigns.

Davis’ gift is a catalyst for fundraising and construction to stimulate the growth of the church in Egypt. Half of Davis’ gift will be used to help the Egyptian church construct new churches in underserved areas. Most towns and neighborhoods in Egypt do not have churches and estimates are that more than 70 percent of Egyptian Christians do not have access to a church. The PC(USA) liaison for Egypt, the Rev. Steve Gorman, will work closely with the Evangelical Presbyterian Church in Egypt in this effort.

The other half of the gift will provide context-sensitive theological education to train leaders for new congregations and support the teaching ministries of Presbyterian mission workers teaching at the Evangelical Theological Seminary in Cairo. Many of its graduates will serve not only in Egypt but also throughout the Arab world.

“The generosity of Jim Davis’ gift to the growing church in Egypt is something that exceeded my expectations and deserves every expression of gratitude,” said the Rev. Dr. Atef Gendy, President of the ETSC. “During the last three years, I paid two short visits to Jim during which I was deeply touched and impressed. Mr. Davis’ thoughtful questions, then, reflected very well his tender heart for the gospel, his interest in the growth and health of the global church and his desire to invest his money in something that makes a difference in the life of a promising church. I could remember him listening carefully and joyfully to both Hunter and me as we were explaining the many opportunities the Egyptian church had encountered in spite of the challenges accompanying the Arab spring.”

Davis’ gift comes at a time when it is needed more than ever. Farrell said without a leadership gift such as this, hopes for Presbyterian World Mission to respond to this open door in Egypt would have been unfulfilled. Davis said he gave this money specifically to challenge others to make significant gifts.

The 175th anniversary of international mission by the General Assembly of the Presbyterian Church (U.S.A.) was celebrated in 2012. In that time, Presbyterian missionaries have planted churches, built hospitals and started schools on every continent. The seeds sown by those missionaries have, in many places, developed into self-sustaining churches and institutions led by local Christians. Today, more than 94 million Christians around the world belong to churches that were founded or co-founded by PC(USA) mission workers.