Legacy continues around the world and in Korean-American congregations 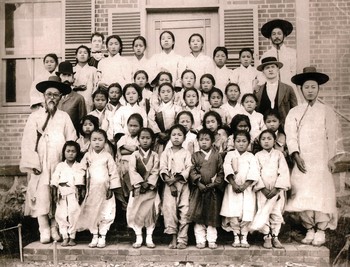 First Christian School in Busan, Korea, 1895. Image from the papers of PCUSA missionary William M. Baird, who served in Korea from 1891to 1931.

The following year—after petitioning the Presbyterian Church in the U.S.A.’s board of Foreign Missions three times to send him to Korea—Horace Underwood’s request was approved and he arrived in Korea in April of 1885, where he served as the first Presbyterian missionary to Korea. After serving for a few years teaching chemistry and physics at Gwanghyewon in Seoul, the first modern hospital in Korea, Underwood returned to the United States in 1891. During his furlough, he delivered an address on Korea to the Inter-Seminary Alliance for Foreign Mission in Nashville, Tennessee. Inspired by Underwood, three students from Union Presbyterian Seminary—Lewis Boyed Tate Cameron Johnson and William Davis Reynolds—applied to serve as Presbyterian missionaries.

This legacy remains as Koreans who have immigrated to the U.S. carry this Presbyterian identity and continue to play an important role in the Presbyterian Church (U.S.A.) Over the past two decades, Korean congregations across the PC(USA) have seen dramatic growth. Today, there are more than 400 congregations with over 50,000 active members, and the Korean Emerging Ministries Office of the PC(USA) is working to develop 100 New Worshiping Communities by 2025.

During a special chapel service to celebrate the anniversary of Korean mission work, held on July 21, the Rev. Sun Bai Kim, associate for Korean Emerging Ministries said, “We, Korean American Presbyterians, have strong conviction with deep spiritual emotion and believe that we are debtors to the Presbyterian Church (U.S.A.) for the gospel of Jesus Christ. God opened the door to Korea and prepared faithful Presbyterian servants of the gospel for mission to Korea. For this, we are blessed.”

Kim added, “The first Presbyterian missionaries to Korea were totally dedicated to the gospel of Jesus Christ and practiced evangelism, worked on church development, founded schools and hospitals and worked for women, children and those who were oppressed and marginalized by the injustices of poverty, classism and sexism.”

To learn more about the work of Korean Emerging Ministries and the history of mission work in Korea, please visit www.pcusa.org/korean.