Noted pastor and educator encourages Presbyterians to be “a new creation” 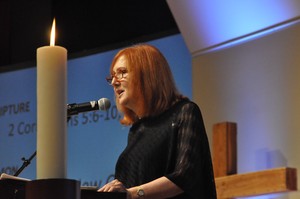 The Presbyterian Church (U.S.A.)’s fourth Big Tent event opened in Knoxville, Tenn., with a lively worship service led by the Rev. Dr. Jana Childers. More than 700 Presbyterians gathered on the campus of the University of Tennessee to sing, dance and hear Childers’ opening remarks.

The basis of her sermon was 2 Corinthians 5 and the debate between the apostle Paul and women prophets about the future of the Corinthian Church. Childers compared the struggle of the early church to those facing Christians today.

“We are very focused on the future of the church. Mainline congregations are facing a challenge,” said Childers. “In California, only 4.6 percent of its residents are members of mainline denominations.”

Childers is the dean and vice president for Academic Affairs at San Francisco Theological Seminary where she also serves as professor of Homiletics and Speech-Communication. Her love of the arts and theater has helped her prepare and deliver unique and engaging sermons. She has appeared at churches and conferences across the country and is the author of several books on preaching as well as editor of the award-winning Birthing the Sermon: Women Preachers on the Creative Process from Chalice Press. 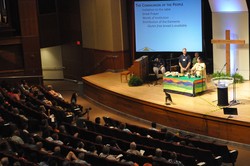 “We hear good things from Utah and Canada and how they’re addressing the homeless problem, yet in a city that prides itself on where it stands on sexuality, churches are failing the transgender community,” she said. “At the seminary, we are spending $46,000 per student per year to educate pastors churches may not need.”

Childers encouraged the attendees to look beyond privilege and to take on a new mission, “In Christ. A new creation.” She urged members to change the way they view the world and those in need.

A slight delay in the starting time did not dampen the spirit of hundreds of heat-soaked Presbyterians who attended the Bible study later in the evening. Rev. Kang Na, who led the gathering, was born in South Korea and has been an ordained minister in the Presbytery of Shenago since 1998. He’s currently an Associate Professor in Religion, History, Philosophy and Classics at Westminster College in Pennsylvania. 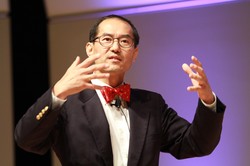 Rev. Na’s presentation title was “The Lost and Found of Missional Living,” with a focus on Luke 15. His sometimes whimsical portrayal of the shepherd, woman, and father and two sons in the three parables spoke to the power of conditioning, habits and behavior. “We’re filled with old conditioning and habits, it’s in our DNA,” says Na. “If you wish to be filled, you must first empty yourself.”

He challenged attendees to read the verses from each character’s point of view, in the hopes that everyone “would have lots of questions” in the follow-up session.

The move of Big Tent 2015 away from being a “conference of conferences” to one large event provides an opportunity to be people of God together more so than in past Big Tent events, according to Tom Hay, PC (USA)’s Director of Assembly Operations. “All of our discipleship is rooted in God’s word to us and opening that word together in community is an energizing, faithful experience for any conference,” says Hay. “Reverend Na is a new voice to many in the church, but a respected, vital witness to scholarship and faithful teaching.”

A professor who teaches courses on the Bible and reformed theology, Na has studied, taught, and served churches in New Jersey, New York, Georgia, Germany, and Korea in addition to being the author of numerous articles. He’s served locally on the Committee on Preparation for Ministry in the Presbytery of Shenango and nationally on the Presbyteries’ Cooperative Committee, writing and evaluating ordination exams for theology and Bible exegesis. He has a Ph.D. in the New Testament from Emory University in Atlanta, and a Masters in Divinity from Princeton Theological Seminary.

Big Tent was conceived as a gathering in the off years between General Assemblies. Organizers say the idea was to celebrate the church’s ministry and mission without the work and detail around legislative and decision-making procedure. Atlanta hosted the first event in 2009 followed by Indianapolis in 2011 and Louisville in 2013.

Previous Big Tents have consisted of numerous individual conferences. This year, a variety of workshops and speakers are available to help Presbyterians “live missionally.” Various ministries and groups are offering networking and education options and the Presbytery of East Tennessee is inviting attendees to visit one of its many congregations before leaving on Sunday.