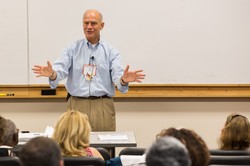 “What does it mean to love God and love my neighbor?”

This question, says the Rev. Scott Weimer, senior pastor at North Avenue Presbyterian Church in Atlanta, disrupted the status quo and challenged his congregation to pursue ministry in ways it hadn’t expected.

Located at the north end of downtown Atlanta, North Avenue Presbyterian Church began its life over 100 years ago as a suburban church. But as the city grew, the neighborhood changed, and the people who originally lived around North Avenue migrated farther out.

As other churches around it relocated to newer suburban communities in the ’60s and ’70s, North Avenue decided to stay in the area, even though much of the neighborhood had become blighted. The problems associated with poverty, drug use and prostitution had by then spilled onto the streets and into the doors of the church.

“None of us can solve the deep needs of the world,” says Weimer. “But we can do what we’re called to do.”

Weimer presented a workshop at Big Tent 2015, describing the congregation’s prayerful work and planning that led them out into the community to meet their neighbors, minister to their needs and advocate on their behalf.

The scriptural guide for the workshop was Mark 6:30–44, the feeding of the 5,000, which Weimer sees as a model for how congregations and individuals are to engage in ministry and mission.

“Jesus has compassion for the needs of people around him, for the masses,” he says. “The disciples notice that the people are hungry and they tell Jesus about it, saying, ‘Fix it!’ But Jesus says to them, ‘You feed them.’ And Jesus asks them, ‘What gifts do you have?’ And they bring the five loaves and two fishes to Jesus, and he does something extraordinary with them.”

Though his context for engaging the passage is North Avenue’s work on human trafficking and poverty in Atlanta, Weimer believes it applies to any ministry to which people are called.

“Atlanta had become a major hub in the human trafficking of children,” he says. “When, as a pastor, I heard those stories and read those statistics about Atlanta, it was like the disciples seeing the people are hungry and [wanting] Jesus to do something. We said, ‘We see kids being trafficked, but who’s going to do something?’”

The church rallied and decided to heed Jesus’ command to the disciples, bringing their gifts and joining them together to address the problem. Members of all ages had ideas of how they could help: a few older widows offered the spare rooms in their homes for children who were rescued from the street, and college students offered to be part of night patrols that would attempt to save children from trafficking. It eventually led to the founding of an organization called STREETGRACE, dedicated to finding ways to stem the supply of and demand for underage sex trafficking.

“We’ve narrowed our focus,” says Weimer of their efforts to combat sexual trafficking in Atlanta. “We say ‘no’ a lot. But when we say ‘yes’, we’re all in.”

Weimer was alarmed by the leniency of laws involving the sexual trafficking of minors. In 2011, legislation was passed based on advocacy by the church and its partners making the sexual trafficking of a minor a felony with a maximum sentence of 30 years in prison and a $100,000 fine. If it can be demonstrated that the child was coerced or deceived, the perpetrator can be imprisoned for life. Reportedly one of the nation’s toughest crackdowns on human trafficking, the new law established additional protections for minors, including the treatment of the child as a victim, not a criminal.

“That’s justice in action,” he says. “That’s social transformation. We do it for Jesus Christ, but we’ll work with anyone who is on the side of justice with us.”

Weimer says this advocacy has attracted many people to the church and given energy to other ministries. Under the banner of “radical hospitality,” it has become home to many immigrants and refugees, including many non-Christians visitors. Weimer notes that scores of Chinese students studying at local universities have started attending, which has resulted in more than 90 baptisms.