Home News Moving from discipleship and evangelism to apostleship

Moving from discipleship and evangelism to apostleship 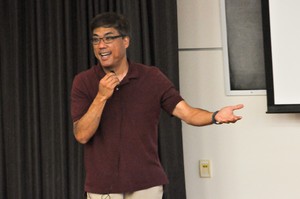 Roger Nishioka presents on the dynamics of apostleship at Big Tent 2015 in Knoxville. —Jennie Littleton for Presbyterian News Service

In a featured breakout session on discipleship and evangelism at Big Tent 2015, a standing-room-only audience was encouraged to “experience God with others, as they are out and about in the world.”

“Discipleship is experiential,” said Columbia Theological Seminary professor Roger Nishioka, who used Matthew 28:16–20 as the scriptural text for his presentation.  “We’ve tended to see this great commission text of ‘go and make disciples’ as a command, but it is more about shaping and forming [who we are as disciples].”

People who were shaped by the culture of the written word, he says, are having trouble transitioning to new emphases on social and visual media. “That is us. We Presbyterians are people of the page. And yet people now yearn to experience the Lord and for that experience to be participatory, imagistic and communal.”

When Nishioka talks to young adults about what this looks like, they tell him that when their senses are fully engaged, “they experience God the Holy.”

“We need to replace our mission statements with a mission vision,” said Nishioka, telling the story of General Electric, which recently removed the gold letters of its mission statement off its building, replacing them with eighteen screens, portraying images of who they are.

“Within 12 seconds they discovered people had a sense of who they were,” said Nishioka. “Before when they’d asked people about the words on the wall, they hadn’t gotten much of a response, but now everyone had a favorite image.”

His point: we owe people images when they come to worship.

Recently the Rev. Amy Miracle and the session at Broad Street Presbyterian Church in Columbus, Ohio, created huge blowups of images representing who they are and placed them in the narthex, so that it was the first thing people saw.

Now, Nishioka said, visitors are coming in to see what Broad Street is all about. People are asking for their favorite images to be put back in the rotation, such as one of an older woman and a child.

“The number one reason people join churches is because they feel so alone and isolated,” said Nishioka. “This yearning for community and belonging trumps everything. During worship they want something specific to happen.”

Making that “something” happen is remarkably simple he said. It doesn’t even have to rely on technology; they just want interaction. “They want someone to talk to them,” he said. “If someone turns and says ‘good morning’ it becomes a warm church to them.”

“So let us move out into world, always asking, ‘What happened after Matthew?’”

“The acts of the apostles,” the audience responded.

“Yes, that means we are sent out by the Holy Spirit to move from discipleship and evangelism to apostleship,” said Nishioka. That transition requires that we put less emphasis, he said, on what we’re doing and more on who we’re becoming and how we’re representing ourselves. And who we’re becoming is not just a matter of digital technology; it’s a whole new world of immediate interactivity. “[We are called] to see where God is at work in the world and then participate in this mission of God.”