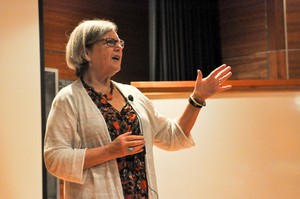 Sister Simone Campbell has never shied away from taking on important issues whether it is immigration reform, healthcare, peace-building or economic justice. As a religious leader, attorney and poet, she has used her knowledge and skill to share public policy issues with audiences ranging from government leaders and church members to activists and the general public.

Her workshop at Big Tent in Knoxville was no exception, mixing sobering statistics and humor to tackle some of the church’s most challenging issues: poverty and hunger. She told the crowd of hundreds that the country is facing a crisis where the top one percent keeps accumulating wealth while the bottom 40 to 50 percent continue to slide back.

“So many people now are forced to work more than one job in order for their families to survive,” she said. “The time for leisure, church and volunteerism is limited. People are overwhelmed and don’t want to deal with reality.”

Sister Simone told the group approximately 73 percent of the households utilizing safety net food programs such as food stamps, Medicaid, etc. have at least one adult working a full-time job. She added that society, in general, has created a stereotype that people living in poverty “are just lazy.”

She shared several stories of highly, educated and motivated people who found themselves living in poverty, unable to find jobs—relying on safety net programs to feed their families. “One told me she never knew how much work it was to be poor.”

“We have to go back to what Jesus did and walk toward the pain and struggle,” she said. “Our biggest opportunities as pastors and ministers is to engage people and learn their stories. Then engage in sacred gossip and share what you have learned about the reality of those who are struggling.”

Describing herself as the “stomach acid in the body of Christ,” Sister Simone encouraged Presbyterians to do their part and not take responsibility to change everything. Doing her part, she says, creates other opportunities for people to serve.

Sister Simone added that the issue of race is “crippling our country.” She said people who are white walk around with a privilege they do not see.

“The biggest need is to absorb and realize our privilege. We must have holy curiosity and practice sacred gossip, sharing ways to break through this perception,” she said. “The poverty of white privilege is not seeing clearly the issue of racism.”

Sister Simone is director of NETWORK, a Catholic organization focused on economic and social transformation. She is also author of the best-selling book “A Nun on the Bus: How All of Us Can Create Hope, Change and Community.”

On three occasions, Sister Simone and a group of Roman Catholic nuns have chartered a bus tour across to shed light on the national budget, arguing it cut important programs aimed to help poor and struggling middle class families. The tour generated a lot of attention from the religious community, elected officials and the media.

“We would spend weeks on the road and have had as many as 70 – 80 sisters ride the bus,” she said. “Everywhere I go now people ask me where the bus is.”

While there are no firm plans for a fourth bus tour, Sister Simone is not ruling it out.

“We have to listen deeply to where we are called and not hold on to it because we love it, there must be a need,” she said. “It’s a subject of prayer.”