Big Tent closing worship encourages Presbyterians to be yourself

Knowing your authentic identity in Christ is key to slaying ‘Goliaths’ 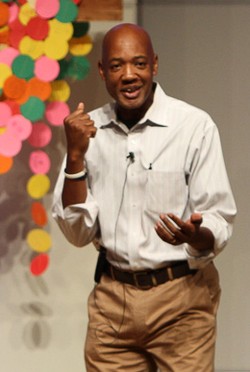 After three days of worship, workshops, Bible studies and children’s activities devoted to missional living in the areas of advocacy, poverty and discipleship, Big Tent 2015 attendees gathered in the University of Tennessee’s Alumni Memorial Building for a closing worship service before leaving Knoxville.

What can Presbyterians learn from the story of David and Goliath in 1 Samuel 17:32−40?

The Rev. Paul Timothy Roberts Sr., president, Johnson C. Smith Theological Seminary in Atlanta, believes one of the biggest lessons from this scripture passage is to “be yourself.”

David, youngest in the family and experienced not in war but in tending sheep, tried on Saul’s armor, but wisely decided he’d rather be himself and use a sling and five smooth stones instead of a king’s oversized armor and sword.

“Our actions and behaviors speak loudly about our sense of identity,” Roberts says, citing examples: 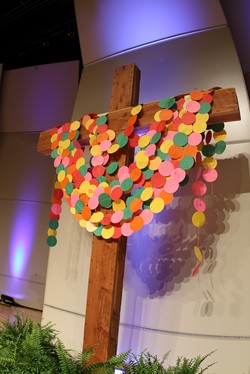 The garland of circles draped over the cross represent prayers for new creation and release. The Big Tent worship team prayed over every circle as they prepared them for worship. —Taylor Gash for Presbyterian News Service

Roberts asks, “Can someone show me where in the Bible it says Jesus rode around in a luxury chariot? Or traveled from countryside to city and back again only to build a culture of sameness? Or believed anything close to those self-centered lyrics I sang in college?”

Roberts says if we are trying to be someone we are not, it’s no wonder we don’t know what to do or how to process it when unfortunate things happen or conflicts arise. “If we are theologically mature, then we are less likely to allow material and circumstantial aspirations to define who we are,” he says, “particularly who we are in Christ.”

Roberts’ journey from his native Stamford, Conn., to pastor and seminary president in Georgia has been a bit like David’s in that he has “tried on” other vocations, working in advertising in New York City for eight years and earning a bachelor of arts degree in architecture and African American studies at Princeton University in 1985. Beginning in the late ’90s and for the next 13 years, Roberts served as pastor of an intentionally interracial PC(USA) congregation, Church of the Master, in the Presbytery of Greater Atlanta.

Roberts’ mission as president of JCSTS, one of 10 theological schools of the Presbyterian Church (U.S.A.), and the only one that is historically African American, appears to be an ideal fit. He is a graduate of the Interdenominational Theological Center—a consortium to which JCSTS belonged for 45 years—earning his master of divinity degree with a concentration in New Testament studies. Under Roberts’ leadership as interim leader for one year and president since 2010, the seminary has expanded and reorganized its trustee board, set forth a new vision and strategic plan and is attracting new friends and supporters.