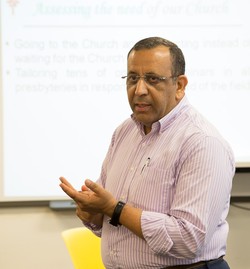 “Serving and transforming church members is not a more important responsibility than serving and transforming the community,” says Atef Gendy, PhD, president of the Evangelical Theological Seminary in Cairo (ETSC). “When people experience kindness, mercy, love, and kingdom values, they think differently about the rule and reign of God over their lives.”

During Big Tent 2015 at the University of Tennessee in Knoxville, Gendy shared several lessons he’s learned as a seminary president in Egypt for more than 15 years. He hopes these lessons will help other church leaders, congregations and presbyteries not only transform theological and leadership training, but also transform communities in the process.

ETSC was established by American Presbyterian missionaries in 1863. In more than 150 years, the Presbyterian Church in Egypt has grown to include nearly 400 churches in eight Presbyteries in the Synod of the Nile.

“Seminary enrollment has increased from 79 students in 2002 to 320 this year,” Gendy says. Because interest in seminary training has grown rapidly since 2000, ETSC has had to raise admission standards and turn down many applicants.

ETSC went back to the basics to reexamine all aspects of training leaders. “We needed to be clear that the seminary exists for the church,” Gendy says. “We clarified our mission statement to reflect the mission of the church to equip pastors and lay leaders—not only of the Presbyterian Church, but also other churches in Egypt, the Middle East, and Arab communities abroad—to serve and transform the church and society as a whole.”

On many occasions Gendy has heard questions about the mission of the church, questions related to whether the church should address social concerns such as illiteracy, poverty, street children, unemployment and extreme violence, or focus solely on evangelism.

In answering these questions, Gendy always points to the early church and to Jesus who did both.

“Jesus did not see evangelism, church planting and social concerns as being in conflict with one another,” Gendy says. “In the Gospel of Luke, chapter 4, we see Jesus going from village to village, preaching the gospel of the kingdom, casting out demons and healing people everywhere. In Luke 9 and 10, Jesus sends his disciples to do exactly the same.”

Graduates of the Evangelical Theological Seminary in Cairo, Egypt —Photo provided by the seminary.

He says society looks to religious leaders, particularly pastors, as community leaders. “Should we take this responsibility lightly or make it a high priority?”

Evaluation by the seminary included assessing the needs of the church and studying churches without leaders. The research showed 127 churches without pastors in 2004, which represented nearly one-third of the churches in Egypt. Now that number is half that, and 32 new churches have been planted. A national survey of churches and seminary graduates, including pastors and lay leaders, looked at areas of strength and areas that could be improved. By listening carefully to constructive criticism of the church, ETSC has broadened its academic options and more clearly identified what students need in each program offered.

“Expanded training widens the scope of ministry and the students’ knowledge and understanding of God,” Gendy says. “In terms of society, this training has helped many of our young graduates solve serious problems between people of different faiths, such as Muslims and Christians.”

The Presbyterian Church (U.S.A.) critical global issue to Train Leaders for Community Transformation, led by evangelism catalyst Juan Sarmiento, includes training in theological education and many areas such as literacy, agriculture, peacemaking, reconciliation, and basic health and hygiene as part of community health evangelism. The campaign will work with 70 partner churches and schools in a priority region of Latin America/Carribean (Cuba), Asia (Indonesia, Pakistan and Thailand), the Middle East/Europe (Egypt), and Africa (six countries where people and communities are being transformed through Community Health Evangelism).

Developing 2,000 leaders around the world by 2017 to do
Evangelism in community-transforming ways,
Empowered by a Reformed contextual theology in
Partnership with over 70 sister denominations and schools.

To help spread the good news of the gospel, consider supporting the work of more than 30 PC(USA) mission co-workers dedicated to training leaders. To connect with others involved in the campaign to train leaders, use the deepleaders hashtag (#deepleaders) on Twitter.

Egypt Partnership Network
The inaugural meeting of the Egypt Partnership Network will be held August 5–8, 2015, at Pittsburgh Theological Seminary. As a Presbyterian World Mission-related network, the EPN is guided by the Constitution of the PC(USA) and General Assembly policies. The meeting will provide updates from counsels, ministries, and PC(USA) mission co-workers serving the Evangelical Presbyterian Church in Egypt.

Atef Gendy, president and professor of New Testament, Evangelical Theological Seminary in Cairo (ETSC), earned his PhD from the University of Aberdeen, Scotland. Previously he served as director of a training center in the south of Egypt to help equip lay leaders for the ministry. He grew up in Assyout in a Christian (Presbyterian) family and is an elder at his church.

Rev. Juan Sarmiento, International Evangelism Catalyst, Presbyterian World Mission, helped launch the first evangelical organization to serve the needs of individuals who are HIV-positive in Brazil. He organized the Hollywood-Wilshire cluster of Presbyterian churches in Los Angeles, and assisted new immigrants by founding a nonprofit organization in the San Fernando Valley. Sarmiento is currently focused on the Presbyterian Church’s critical global initiative to Train Leaders for Community Transformation.