Serving neighbors, the Fellowship place grows from 22 to 100 in five years 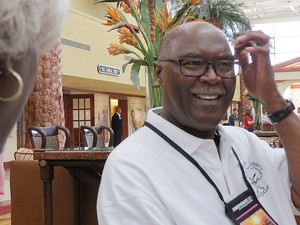 The Rev. Dr. Michael A. Robinson, pastor of the Fellowship place, celebrating at the recent 1001 NWC conference: ‘Pursued by Grace.’ —Paul Seebeck

As the latest worshipping community to become an organized congregation in the Presbyterian Church (U.S.A.), the Fellowship place, (tFp) was thrilled to celebrate with fellow 1001 conference goers last week (Aug. 10-14).

“It is exciting for us to be here at this ‘Pursued by Grace’ conference,” says the Rev. Dr. Michael A. Robinson, tFP’s pastor. “What we’ve seen and heard here confirms we are on the right track—as grace plays out through all of our ministries to people in our communities and neighborhoods.”

On July 11, 2015, tFp became the first predominantly African-American congregation in the Presbytery of Charlotte to organize and charter in 25 years. Located on the west side of Charlotte, N.C., it currently worships in a business shopping area where homeless persons sleep behind the buildings. “That break’s God’s heart and ours,” says Robinson.

The Fellowship Place began five years ago when 22 members of Statesville Presbyterian Church felt God was asking them to respond to the needs of their hurting community. Statesville, where Robinson pastored, had been through a three-year transformation process with nine other Presbyterian churches under the guidance of the Presbytery of Charlotte. At the conclusion of that process, per an agreement, Statesville required a two-thirds vote by the congregation to continue on in the process—which it didn’t get.

Asking Robinson to lead them, the 22 who wanted to continue on in the transformation process began studying and praying together in their homes. Eventually a vision began to form. They decided to start a new worshipping community centered in the mission of feeding, clothing and caring for people in the neighborhood. “We starting showing up on a street corner in our neighborhood with food and clothes, to create a place of fellowship where we could touch and pray with people,” says Robinson.

As word spread, people in the community came to ‘tFp on the Corner’ to get their physical and spiritual needs met. At one point the 22 people at tFP fed and clothed over 700.

“God just multiplied what we had,” says Robinson. “As people saw us serving those in need, they donated money, food, water and inspirational literature. We’ve also been blessed by presbytery support, and business and educational partners, helping us on this faith journey.”

Robinson remembers one cold October morning when many visitors gathered in flip-flops because they did not have shoes to wear. They referred to the corner as a blessing, saying they “didn’t know where next meal was going to come from,” but that, “God had directed them to the corner.”

“They’d never encountered a church like this, and wondered who we were,” says Robinson. “They began following us from the corner to the church because we were sharing God’s love.” 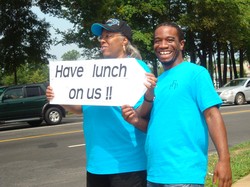 the Fellowship Place began as a new worshiping community in December 2011. Its mission is to feed and clothe neighbors in need, and to create a place where physical and spiritual needs can be met. —Photo courtesy tFp

Staying consistent to their mission, tFp grew from 22 to 100 people in five years. They continue to feed and clothe people on the corner, building relationships in their community, always telling those they greet, “No matter what the circumstances, God still loves you, right where you are.”

“I didn’t think I’d ever go back to church,” says Cheryl Maynard. She hadn’t been in 20 years, but went on Easter Sunday this year, after receiving an invitation from her girlfriend. “I thought I’d go once and never come back, but Reverend Robinson changed everything. He taught me how to accept God and let God deal with the past. He asked me recently ‘do you believe in God? I do now,’ is what I said.”

Curtis Speas had also been away from church for more than a decade. Like Maynard he came to tFp after a friend invited him. “Even though I grew up in church, I thought I was immune to it,” says Speas. “But basically it touched me. It was euphoric to have my heart softened a bit.” After worshipping three times at tFp, Speas became a member.

Being present for worship at the July 11 chartering and installation service meant the world to him, as a multicultural and multigenerational group from the community and presbytery came together to celebrate. “Man, it was total bliss,” says Speas. “We were so full that weekend, and then the next day, Sunday, two new people joined the church.”

“It’s what we’re been praying for,” adds Robinson. “ It’s so gratifying to meet people where they are. It does my heart good. Our church and community are learning we can’t do without the love of Jesus Christ, that’s what it’s all about.”

The Fellowship place received a 2015 Walton Award from the Presbyterian Mission Agency for its excellence as a new church start. Robinson also went through new worshiping community training at Riverside Presbyterian Church in Sterling, Va., where 1001 East Associate Shannon Kiser is based.