Agreement signed after 20 months of violence 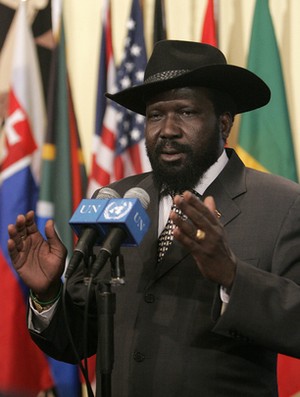 Presbyterians close to the conflict in South Sudan are praying the peace agreement signed today by President Salva Kiir will bring about lasting peace.

The agreement was signed Wednesday around 5 p.m. EAT (eastern Africa time) in front of a group of regional African leaders in Juba. Kiir’s rival, Riek Machar, signed the agreement a week ago in Ethiopia, but Kiir refused to sign saying he needed more time to review it.

Peter Tibi, director of RECONCILE International (Resource Centre for Civil Leadership), a Presbyterian World Mission partner, was coordinator for the faith-based observers during the negotiation for the terms of the cease fire and peace agreement.

"We are hopeful for the real possibility of peace with the signing of the document by both parties,” he said. “The next 24 hours is critical for the establishment of the cease fire and if this is truly established we look forward to the free movement of people within South Sudan."

Tibi said that all the religious leaders in South Sudan are asking for prayers for “God to guide the nation, its people, and its leaders, into peace and a time of healing that will endure the challenges that remain and open the way for full reconciliation.”

Since December 2013, violence has resulted in thousands of deaths, more than two million left homeless and many facing starvation. Fighting began after a struggle for power between then Vice-President Machar, an ethnic Nuer and rebel leader, and President Kiir, a Dinka. Fighting has continued along ethnic lines.

Bill Andress, an active member of the Presbyterian Sudan/South Sudan Mission Network, is among those who remain cautious in his optimism.

”While President Kiir has signed the peace agreement, it is too early to begin singing in the streets,” he said. “Much is left to be understood. Will the defectors from the opposition group be spoilers? Will the fighting stop? Will humanitarian aid be able to reach those in need? Can the peace hold? Praise God but let's keep on working.”

Nancy and Shelvis Smith-Mather became mission co-workers in South Sudan in 2011. They have been in the U.S. for the last several months talking to U.S. congregations about their ongoing work, but plan to return to South Sudan in September to join Sudanese efforts toward peace, stability and a better life for future generations. Shelvis is the principal of the RECONCILE Peace Institute in Yei.

“I had chill bumps when I heard the news,” said Shelvis Smith-Mather. “The last 20 months have been difficult, but the last year has been especially difficult. The economy is depressed. Basic needs like fuel and electricity are almost non-existent. People are hungry more than ever before. The possibilities this opens up are awesome, but we also know there are huge challenges ahead. Nancy and I are very excited to be headed back to be a small part of the peace process.”