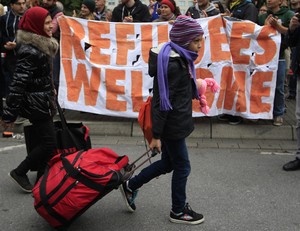 Migrants are welcomed as they arrive at the main railway station in Dortmund, Germany, on Sept. 6, 2015. —Photo courtesy REUTERS/Ina Fassbender

Europe’s refugee crisis has inspired faith communities across the continent to open their doors to the newcomers and advocate for more state and private help, but the urgency of their calls and the depth of responses to them vary from country to country:

* Germany has been the most generous with the refugees, many of them Syrian Muslims fleeing war and jihadist threats in their homeland. The leaders of its Roman Catholic and Protestant churches have welcomed refugees arriving by train in Munich and churches around the country have joined local officials in feeding and housing them.

* Hungary, where the government has built a fence along its southern border to keep refugees out, wants select Christian refugees only. Catholic Bishop Laszlo Kiss-Rigo was quoted as saying his country faced a Muslim invasion: “They come here with cries of ‘Allahu Akbar.’ They want to take over.”

In between are a wide range of conflicting views ranging from selfless willingness to help to extreme wariness about immigrants from Syria, Iraq, Afghanistan and Libya.

Prosperous and peaceful Europe has for years been a magnet for Middle Easterners and Africans fleeing oppression and poverty in their unstable homelands.

That most newcomers are Muslims and violent Islamism is on the rise complicates the picture, especially in countries where elections loom and far-right parties are gaining support. Many mainstream politicians are worried about whether the European Union can maintain its openness and tolerance amid all these tensions.

“This is a test of our human values and Christian legacy,” said the Rev. Olav Fykse Tveit, general secretary of the Geneva-based World Council of Churches.

About 380,000 people have reached Europe by sea this year, according to the International Organization for Migration. Over 250,000 arrived in Greece from Turkey, a short route that has claimed about 100 lives so far, while the rest took the more dangerous route from Libya to Italy where about 2,600 drowned. Nearly four million Syrian refugees have stayed behind in Turkey, Lebanon and Jordan.

The leading voices in Europe welcoming the asylum seekers are Pope Francis, who on Sunday (Sept. 6) urged all Catholic parishes in Europe to take in at least one refugee family, and Chancellor Angela Merkel, the daughter of a Lutheran pastor, who has opened Germany’s borders to all refugees fleeing the civil war in Syria.

“Mercy is the second name of love,” the pope reminded the crowd in St. Peter’s Square as he announced the Vatican would take in two families.

“Germany is doing what is morally and legally necessary—no more and no less,” Merkel declared in defending an open-door policy that should quadruple arrivals of asylum seekers to about 800,000 this year.

Germany’s Catholic and Protestant churches have cared for refugees for years and their leaders began calling this spring for extra efforts due to the boatloads arriving in Italy and Greece on their way north.

Catholic Cardinal Reinhard Marx and Bishop Heinrich Bedford-Strohm of the Evangelical Church in Germany ended a lunch appointment in Munich on Saturday with a spontaneous stop at the train station to greet refugees after seeing on their cellphones that a trainload was about to arrive from Hungary.

“Nothing moves us more than the fate of the refugees who have made it this far after a long and dangerous journey,” Bedford-Strohm said.

With their solid budgets, German churches have long been able to donate millions of euros to finance special relief projects. Even before Pope Francis’ appeal, Cologne’s Catholic archdiocese was housing refugees in over 130 of its buildings and launched the “New Neighbor Network” to coordinate donations from parishioners.

Tens of thousands of volunteers help the newcomers with language courses, baby-sitting and dealing with the local bureaucracy. In Bavaria, where many refugees first enter Germany by train, the Lutheran church has over 3,000 volunteers. Munich’s Catholic archdiocese has more than 3,600.

As Muslim refugees have begun appearing in their mosques, German Muslims have also stepped up to help.

“We show them they can be Muslim and German,” said Aiman Mazyek, chairman of the Central Council of Muslims.

In neighboring Austria, the shocking discovery of 71 refugees who suffocated in a locked truck last month has mobilized public opinion. Vienna Cardinal Christoph Schoenborn said Austrians could no longer ignore the drama spilling over into their country and hoped it could shelter about 70,000 refugees.

Sweden has taken in more asylum seekers per capita than any other European country, although the growing influence of nationalist groups has made immigration a controversial issue.

The atmosphere is quite different in Eastern Europe, where four decades of isolation during the communist period left societies less open to outsiders and less guarded about expressing disdain for them:

* Poland said it only wanted to take in Christian refugees.

* Hungary’s Christians have provided food, clothes and blankets to refugees blocked for days at Budapest’s Keleti train station but their churches have taken a low profile. Catholic Cardinal Peter Erdo has refrained from criticizing Hungary’s anti-immigrant stand and has said the church cannot house refugees because that would amount to people smuggling.

The British and French governments, both concerned about the cost and potential political backlash of letting in so many refugees, pledged to receive more migrants in recent days after a rising swell of calls from faith leaders to show more compassion.

Prime Minister David Cameron of Britain said in June that London would take in only “a few hundred more” Syrians than usual. That prompted Lord George Weidenfeld, 95, an Austrian Jew who fled his Nazi-occupied homeland for Britain in 1938, to say: “This mood of indifference is reminiscent of the worst phases of appeasement.”

With pressure mounting, Cameron announced on Monday (Sept. 7) that Britain would take in 20,000 Syrian refugees over five years — more than before, but still a relatively small number.

President Francois Hollande announced on Monday that France would accept 24,000 refugees in a European Union plan to take in over 100,000 in the next two years.

He and Merkel wanted the EU to back a “permanent, mandatory system” under which each country would have to accept its fair share of a total of 120,000 migrants.

“Europe,” he said, “must protect those for whom it is the last hope.”