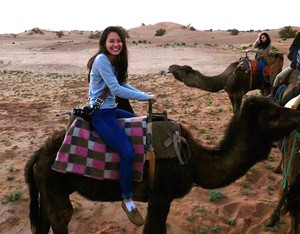 When asked how she’s empowered by her faith, Emily Chun quickly replies, “My faith gives me purpose and assurance that my life is not an isolated event without consequences, but one that is part of a bigger, cosmic reconciliation between God and man.”

“The focus on empowering women here was a big draw for me when I was looking at schools,” says the South Korea-born, New Jersey-raised junior at Wellesley College in Massachusetts. “Not only does the culture at Wellesley seek to empower women, but they also provide a support network for graduates. Since I started, my eyes have also been opened to the explicit and subtle discrimination that women face in almost all spheres of life.”

"Last year, I spent some time taking action to address different forms of discrimination creatively and indirectly through a youth enrichment program for immigrant teens,” she says. “I spent a year co-directing the Boston Refugee Youth Enrichment program, which aims to empower immigrant teens, many of whom are daughters of refugees from Vietnam and Cape Verde. Through our work, we help them find their voice, constantly reminding them that their voices are important and their stories deserve to be told."

Emily and her family moved to the United States from Seoul, South Korea, when she was just six years old and says the transition was sometimes difficult, although formative.

“Much like some of the young women that I met during my time at the Boston Refugee Youth Enrichment program, my experiences as an immigrant weren’t always easy, but the experiences that I’ve had thus far in my life have shaped my path and my faith journey,” she says.

Her father is a Presbyterian pastor, so she’s “grown up” in the church, surrounded by her cultural and linguistic heritage and immersed in a faith community.

“Most of my faith journey has been shaped by my youth groups and my college ministry,” says Emily. “I think my main community throughout all these years has also been other immigrants or children of immigrants. My parents are not fluent in English and I don’t really speak Korean anymore, so communication with them can be a challenge. Because of that, my Korean Presbyterian church has always been sort of my anchor here in America.”

The financial support she has received from the Presbyterian Church (U.S.A.)’s Women’s Leadership Development and Young Women’s Ministries supplemental award for undergraduate women, and the office of Financial Aid for Service has opened numerous doors for Emily and allowed her to focus her time and talents on her studies and projects like the refugee enrichment program in Boston.

“My faith has sort of taken some of the pressure off of me, in a way,” she says. “It’s helped me not stress too much about what I’ll do after I graduate, and has instead guided my academic interests and studies. Rather than focusing on where I’ll work or what I’ll do, I have the freedom to grow and explore and study things that shape my critical and creative thinking. I just trust the Lord and know that it’s not so much about what I’m studying, but more about where the Lord will lead my life as I continue to seek God and deepen my faith and that relationship. The freedom that provides, and the spiritual and financial support that I’ve received from the church has made that possible for me.”

Emily adds, “While I’m not entirely sure what I’ll do after graduation, it’s really out of my hands anyways, you know? I’m here focusing on my studies and my skills and trusting that God has a plan in place for my life.”

Financial Aid for Service and the Office of Women’s Leadership Development and Young Women’s Ministries collaborated to offer women participating in the National Presbyterian College Scholarship and Student Opportunity Scholarship an opportunity to apply for an additional $1,000 supplemental award. Emily was one of seven young women selected to receive the additional supplemental award for the 2015-2016 academic year.

To learn more about the work of the Office of Women’s Leadership Development and Young Women’s Ministries visit www.pcusa.org/youngwomen.