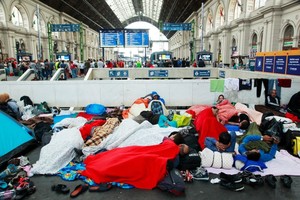 The Presbyterian Church (U.S.A.) is one of a dozen Christian denominations and ecumenical groups that have sent a letter to the White House, urging the president to do more to help Syrian refugees. The letter, sent this week, said not enough attention is being paid to the circumstances that have led refugees to leave their homes for parts unknown.

“As a result of civil war, half of all Syrians are displaced from their homes and more than 220,000 have died, according to the United Nations,” the letter stated. “Rather than responding with deeper military involvement, the armed involvement of all outside actors, including the United States, must cease. This includes the provision of arms and weaponry, as well as training to opposition groups. The U.S. must urge its allies to do the same.”

The group said the U.S. government should make a negotiated solution to the Syria crisis a top diplomatic priority including continued dialogue with Russia and the willingness to enter negotiations without preconditions. In addition, the letter states Iran and all involved actors should be at the table if a sustainable solution is to be found.

The letter pointed to the lack of financial support for humanitarian assistance, adding that despite the difficulties, many people wish to remain in Syria or nearby countries.

“But their options are bleak, as the Syrian economy is in disarray and most refugees in neighboring countries are unable to work legally. As the United Nations and other humanitarian agencies have been forced to reduce or eliminate food vouchers, rent subsidies and other forms of assistance, and families exhaust their reserves, many feel they have no option but to leave.”

While commending the U.S. for its $4.5 billion dollar commitment to humanitarian needs in the region, the church leaders said the U.S. can do more and encourage others in the international community to increase their contributions as well.

The letter also urged the U.S. to be receptive to refugees seeking a new home. “Even with more adequate funding for humanitarian assistance, some Syrians feel they will never be able to return home safely and wish to resettle in a third country. Many in our faith communities have a long and rich history of welcoming refugees. We encourage the U.S. to accept more Syrian refugees and to expedite the processing of these applications.”

The letter concludes by calling the Syrian crisis “human-made and political.” It urges the U.S. to dedicate its collective long-term vision and energies to resolving the crisis.

The Rev. Dr. J. Herbert Nelson, director of the PC(USA) Office of Public Witness said the U.S. is challenged with many opportunities to bring peace to Syria, but adds the greatest challenge is choosing peace over our own desire for power.

“As a nation, the United States must claim the role as an agent willing to take the moral high ground for the sake of peace in the world,” he said. “Like Jesus, we must teach love through efforts. Although there is a cost to being a peacemaker, we must avoid the greater cost of turning our heads while lives are lost.”

The full text of the letter can be found at this link.