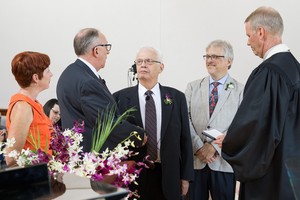 At the same time a Kentucky county clerk was being jailed for her refusal to issue marriage licenses to same-gender couples, Paul Kempf and Robb Gwaltney said their vows in the Presbyterian Center chapel yesterday.

An intimate group of friends, family and co-workers gathered to witness the ceremony presided by the Rev. David Maxwell, an editor at the Presbyterian Publishing Corporation. Kempf has been an employee of the Presbyterian Church (U.S.A.) since 2012 and Gwaltney is a former employee who helped plan and oversee the PC(USA) move to Louisville in 1988.

Maxwell addressed the differing opinions of marriage within society and the church saying, “The concept of biblical marriage is very different than our modern views.”

“No biblical writer would have envisioned what we think of as a good marriage today—with concepts of equality and mutuality,” he said, noting that the Bible includes, even endorses, marriage patterns rejected by modern society such as multiple wives for men, ownership of wives by husbands and the forceful taking of wives from defeated peoples.

Recognizing the PC(USA) is “grieving” individuals and congregations that have departed the denomination over its decision to allow same-gender marriage, he said, “We mourn that some have left, while we celebrate a new day.” 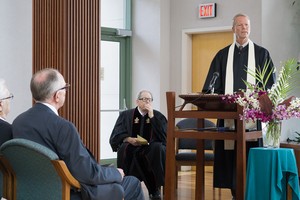 The Rev. David Maxwell (standing) preaches at the wedding of Paul Kempf and Robb Gwaltney on the familiar text on love from 1 Corinthians 13. —Gregg Brekke

Reflecting on 1 Corinthians 13:1–13, Maxwell said, “If you don’t relate to others in a spirit of love, it really doesn’t matter.” He concluded his remarks saying, “We trust that God will use our limited vision for holy purposes.”

Kempf and Gwaltney also see it as a milestone, but for different reasons. After 20 years together, Kempf says he’s overjoyed to celebrate their marriage both legally and in the national headquarters of the denomination they love.

“It’s a privilege to have our wedding at the Center,” said Kempf. “It means a lot that our family and friends can join us in this chapel. If it wasn’t for the Presbyterian Church moving here, Robb would have never come to Louisville and we would never have met.”

At its July 22–24, 2015, meeting, the Executive Committee of the Presbyterian Mission Agency Board entertained a request for a same-gender wedding to be conducted in the chapel at the Presbyterian Center in Louisville. The committee approved the request, saying its use was “consistent with the center’s chapel and building use policy, for any couple bearing a lawfully issued marriage license.”

Nine couples have now been married at the Presbyterian Center since the denomination moved its headquarters to Louisville in 1988. Eight of those ceremonies took place in the chapel, which completed construction in 1995.