PC(USA) offers prayer of support for families and aid workers 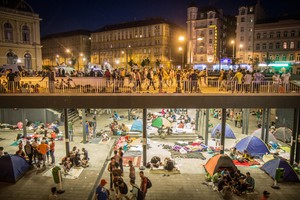 Thousands of Syrian refugees find themselves stranded at a Budapest train station as they seek to travel across Hungary to the Austrian border. —Daniel Fekete/HIA/ACT

The Syrian refugee crisis has drawn increased attention this week with the heartbreaking photos of a lifeless child’s body being pulled from the Aegean Sea. Alyan Kurdi was one of at least a dozen refugees who drowned while seeking safety from the conflict in Syria. In the past few days, thousands more refugees have found themselves stranded at a Budapest train station as they seek to cross the border into Austria.

Images out of Hungary show people either camped out at a local train station, or swiftly running along the tracks toward the border. Witnesses describe the station as a place of “disorder and confusion” as families gather on blankets on the station floor. The railway company suspended all trains leaving the Hungarian capital for transport security reasons.

Police have tried to contain the families at the station, yet some have broken away to reach the border by foot, nearly 100 miles away. Meantime, Hungarian volunteers are trying to distribute food, water and other supplies to those who continue to wait.

“In addition to the work we are already doing in Syria and Lebanon, Presbyterian Disaster Assistance continues to support its European partners and members of the ACT Alliance (Action by Churches Together) as they minister to the large numbers of stranded families,” said the Rev. Dr. Laurie Kraus, PDA coordinator. “Our hearts are broken as we try to stand on every front with those who are suffering. We are working to provide ways for local congregations and individuals to engage in advocacy and hospitality for Syrian refugees and others.”

According to the United Nations High Commissioner for Refugees, an estimated 2,000 refugees are crossing into Hungary along the southern border each day. Government officials report they are setting up a “temporary social zone” not far from the train station and have asked for technical help for housing units. The camp is not expected to be functioning for at least another week and a half. 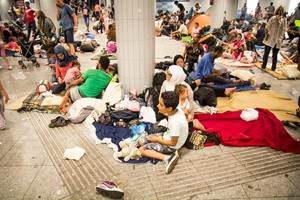 “Today the plight of the four million Syrian refugees has come a little closer to home,” said Susan Krehbiel, PDA catalyst for Refugees and Asylum. “Yet we can be part of the solution—praying for the refugees to find strength and hope and for the countries who are hosting them. At such desperate times, we are thankful for the many European citizens for their heartfelt responses to provide shelter, food and friendship to the families who have risked their lives in search of safety.”

Since the first of the year, more than 100,000 displaced persons from Syria, Northern and Middle Africa, Afghanistan and Iraq have registered in Hungary alone.

“Europe—both West and East—is being tested on the strength of its commitment to human dignity and rights. This is a test of our human values and Christian legacy,” said the World Council of Churches (WCC) general secretary the Rev. Dr Olav Fykse Tveit in a Sept. 4 statement issued from the WCC headquarters in Geneva.

Tveit continued, “Today the countries of Europe are confronted with the worst refugee crisis since the Second World War. But compassion and action seem to be tragically insufficient to meet the pressing need. This is so despite the tragedies reported daily from the shores and borders of Europe – let alone from the countries from which these people have been forced to flee by conflict, oppression and extreme poverty.”

“Taking responsibility for human beings in desperate need must be done without discrimination on any criteria other than their needs. We are shocked to hear of some countries rejecting refugees on the basis of their religion.”

The WCC general secretary went on to say that the “WCC encourages churches in countries of arrival, transit and ultimate destination in their efforts to welcome the stranger, and to model a compassionate response to people in such desperate need.”

“We need ecumenical cooperation in these efforts, in order to ensure that they make the greatest possible contribution to alleviating this terrible suffering,” Tveit added.

For more information on how to provide support for Syrian refugees during this crisis, click here.

If you are interested in helping resettle the displaced families, contact the nearest Church World Service (CWS) affiliate.