Epiphany services transport good news from ‘neighborhood to the nations’ 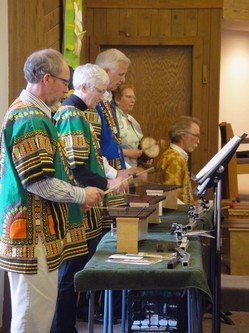 For the Rev. Jesse Larson, a treasured gift from his father was exactly the right gift to quite literally show and tell his congregation about Epiphany—about Christ as God’s gift of grace and salvation for all persons.

“Years ago, my dad, a retired Presbyterian pastor, gave me this cool little packet of gold, frankincense, and myrrh,” says Larson, pastor of Union Presbyterian Church in Monroe, Wisconsin, “so I brought it to church last Sunday and passed it around during the sermon. I explained to our members what each of them are, what their history is, and what they were used for.”

Through this interactive exercise during worship, Larson says that church members were able to see, touch, feel, smell, and hear again that it was the wise men who brought the Christ child these gifts.

“Any time all of the senses are engaged during worship, church members respond,” he says. “As people handled the gifts, a few said they always viewed them as oil—you know, the frankincense and myrrh—but since they both come from a tree, I explained that this is what the hardened form looks like, what it smells like, the different fragrances that they have.”

But it’s not just on Epiphany that members of the Union Church find all of their senses fully engaged.

Larson, who spent much of his twenties living and working in Africa—primarily Namibia and Ghana—was drawn, in part, to serve the small congregation in rural Wisconsin because of its African drums, which had been gifted to the church some years before by a member who recently died in her 90s.

The ensemble is open to people of all ages and plays in worship about once a month and occasionally provides support for the choir. The group, which currently numbers about 13—including Larsen—counts among its members at least five or six people who aren’t affiliated with the church.

“They haven’t joined the church,” Larson says, “but they now attend worship.”

“Our organist is very open to it and very supportive,” says Larson.

In fact, in the true spirit of Epiphany, the small congregation, which averages 50 in worship, will be taking both its message and its music into the community—out from the neighborhood into the nations.

First, on Sunday, January 10, at 3:00 p.m., at St. John’s United Church of Christ in Monroe, the Union Church will join its voices with the choirs of three other congregations of Green County for its annual community Epiphany concert.

Later in January, the church’s African Drum Ensemble will take the stage as part of the annual Showcase of Talent, to be held at the Monroe High School Performing Arts Center at 7:30 p.m. on Jan. 15 and 16.

“At the beginning of the Christmas season we proclaim the mystery of the incarnation—that God’s Word ‘became flesh and blood, and moved into the neighborhood,’ as Eugene Peterson renders John 1:14 in The Message,” says the Rev. David Gambrell, associate for worship in the Presbyterian Mission Agency’s office of Theology and Worship.  “With Epiphany, the gospel moves out from the neighborhood to the nations. God’s Word made flesh is good news for the whole world.”

In an era and a widespread demographic of aging churches, where people often don’t have energy, where there are few new members and no new young people coming, Larson says that “doing things the way they’ve always been done doesn’t have to be the way we do it.”

“I’ve always loved rhythm,” he says. “I think it’s fun, and I think it makes sense theologically to have a call to worship and to learn different songs. I love how in the PC(USA) with our new hymnal we get more and more world music.”

Larson, who has lived in Ghana seven times, says that the ensemble is different from a traditional African drum circle, where people get together on the spot and make up rhythms.

“These are real rhythms where you have to learn the specific pieces,” he says. “We keep trying new things. These are neat, open-minded people.”