Chasing education and bringing it home 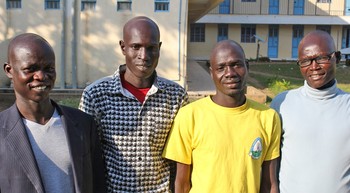 I sat in front of four young South Sudanese men on the Yei Teacher Training College (YTTC) campus, a video camera in hand. The camera kept wandering away from the student teachers’ faces as I tried to stay focused on the recording, while captivated by their incredibly brave, determined, and spirit-filled testimonies. - Nancy Smith-Mather

Daniel
“We used to wake up at 4 a.m. Then we traveled [for three hours by foot], and in the morning we reached that village,” explained Daniel Omot Nyigwo. “Then we attended the classes. Primary class used to end at 12, midday. When the classes ended, we started footing from there—three hours again. I was about 11 or 12 years old, so it was a very terrible life. We foot from there with hunger, thirsty, no water on the way, nothing to eat. Our parents actually said, ‘Why don’t you leave school, you are now tired, and you have grown thinner and thinner.’”

Even though I asked the question, I was not prepared for the response. Starting from their various rural communities in Pochalla County, these four future teachers, who received a PC(USA) scholarship to attend YTTC, talked about their childhoods. Through the lens of a common pursuit of education, they each shared their story. “I was born in 1983,” Daniel continued, “and the war between SPLA [the Sudan People’s Liberation Army] and the Khartoum government broke out in 1983, before I was born. So, I was born in the war, and I started my education in the war.”

None of the four completed secondary school (the equivalent of 12th grade) in their home county; it was not offered. So, as children, they started chasing the dream of education. They took different paths, walked for days, jumped on trucks, crossed dangerous rivers, and entered unfamiliar countries. At young ages, they left their homes and their parents, struggling to obtain a high school education.

In Daniel’s early years, there were no trained teachers in Pochalla. The children learned from relatives who volunteered to teach them. These “brothers” attended schools in neighboring Ethiopia, and taught when home for holidays. “Instead of leaving us like that [without school],” Daniel said, “They said, let us take the little knowledge we have and share with this brother to us. Even though we know [only] ‘A,’ let us share ‘A’ with them. If it is ‘B,’ let us share ‘B’ with them.”

Omot
Fellow scholarship recipient, Omot Mam Ochalla, described this responsibility as “bringing their loved ones up.” Omot started Primary School, the equivalent of elementary school, at 10 years old. Before that, he said, “[Where we lived] there was nothing like school, but my father had some books. [He] taught me, and the type of teaching was not favorable; sometimes he had to knock my head when I miss something.”

Even after his family moved, and he entered primary school, Omot continued to face challenges. “We didn’t have trained teachers,” he explained. “At times we [would] repeat the same class for two years, three years. Primary one, again primary one, and then next year you come to primary two, because there are no stable teachers.”

Omot endured the repetition until he reached primary seven. In his town, however, they did not have access to the nationwide exam offered in the final year of primary school, primary eight, so they were asked to repeat primary seven again. At this point, Omot begged his father for money to travel away to finish school.

“There were some convoys which used to come from Kenya carrying food items to people down there in Pochalla,” Omot told me. “They were just using the forest, there was no constructed road. [My father] gave them that amount [for the transport fee], so I went to Kakuma refugee camp [in Kenya].”

Omot finished his primary eight in Kakuma, yet he emphasized that life in the refugee camp was “not good.” George Ochalla Okach, another PC(USA) scholarship recipient who traveled from Pochalla to Kakuma for school, found life in Kakuma so difficult that he left. George made the long journey to Ethiopia in hopes of completing his education there. He was in a camp in Ethiopia at the same time as Daniel. After walking three hours each way to school, Daniel received permission from his parents to move to the refugee camp in Ethiopia. In 2003, however, both George and Daniel escaped from Ethiopia, surviving a genocide that broke out, targeting their ethnic group.

From Ethiopia, Daniel fled to Kenya and completed his primary school in Kakuma refugee camp. George headed back to Pochalla. In Pochalla, however, Primary Eight was still not offered. “I decided to go to Malakal,” George told me. Malakal is in the northern part of South Sudan, close to the border with Sudan. The National Office of the Presbyterian Church of South Sudan resided in Malakal until the recent civil war of 2013 at which time the church leadership was forced to relocate to Juba.

George recounted his trip to Malakal, “I started my journey from a village called Otalo. Up to Pibor, footing, which took me three days on the road… Then I moved from Pibor to Bor town, still footing, where it took me five days to reach to Bor.” He continued by boat to Malakal which took him seven days on the river. When he arrived, an uncle welcomed him and took care of him. George finished Secondary School [high school] in Malakal, as did the fourth PC(USA) scholarship recipient from Pochalla, Alimo Olango Cham.

Daniel and Omot attended secondary school in Uganda. When it was time to pay the fee for the final exam to finish the equivalent of high school, Omot called his father to ask for the money. “My father refused,” he recounts. “He said he had no money to pay me. I said ‘why? and I am sitting for the examination, the final.’” His father, a soldier in the liberation movement, had become mentally ill and used all his money on medication. “The only way for you to do,” said the soldier to his son, “You abandon (school), you abandon that.”

Omot eventually took the exam. He contacted an uncle who had been resettled in Australia. The uncle paid the fee, and Omot passed the exam with high marks.

After completing secondary school, Omot and Daniel returned to Pochalla, as did George and Alimo. Each of them returned home with a rare and powerful accomplishment, a high school education. None of them had money to continue their studies at the university level, but they were present in Pochalla when their local Presbyterian Church announced that scholarships were available through the PC(USA) to attend the Yei Teacher Training College.

Daniel, Omot, George and Alimo
Daniel, Omot, George and Alimo took the forms. Daniel explained the decision to apply in this way, “For us, as members of the church and of the community, some of our brothers and friends tried to advise us [by saying], ‘instead of stopping at this level (of education), you try to apply for (the scholarships), and then you will be the people to help the community later on.’”

Daniel continued, “So, I got the courage to come back to school. I applied, I attended the interview, and I managed to pass. So, from there, I thank God. I am now so proud to be a teacher, to act as a role model, and I promise I will do something better… to change the coming generation. I thank Presbyterian Church for supporting us.”

The four soon-to-be certified teachers are eager to bring education back to their home community in Pochalla, where there are currently very few children from the age of eight to twenty years old. Daniel said many have migrated away in search of education.

“Without education, there will be no way to fight against this hunger that is affecting South Sudanese,” he continued. “Through education our people [will] get good water for drinking and good health facilities.”

Alimo added, “Peace will come to the community through education.”

I felt the sting of Alimo’s final comment in the hearts of these four young men. As I sat with them, only a few weeks remained before they would return to Pochalla, having completed their first of two years at the teacher training college. The Pochalla they were returning to would be different from the one they left. Violence within their county disrupted the life they knew a year prior when they traveled to Yei.

While they do not know what they will encounter, they will arrive ready to engage the children and community in activities to build peace. They go home with greater confidence and a greater ability to communicate and exemplify the changes they long to see.

PC(USA) mission co-worker the Rev. Nancy Smith-Mather serves in South Sudan alongside her husband, the Rev. Shelvis Smith-Mather. They work with Resource Center for Civil Leadership International (RECONCILE), an ecumenical Christian organization that promotes peace building through training in trauma recovery, conflict transformation and civic education. In her role with the SSEPP, Nancy also works alongside the Presbyterian Church of South Sudan, Across and YTTC. Read letters from Nancy and Shelvis.