Home News Celebrating a century of teaching, preaching and healing in the Philippines

Celebrating a century of teaching, preaching and healing in the Philippines 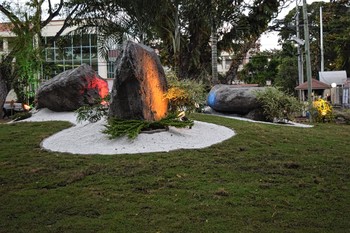 The recent dedication of a Presbyterian Mission Garden containing three large rocks marked the centennial of Silliman University Church (1906-2016) in Dumaguete City in the Philippines.

The rocks represent teaching, preaching and healing as the basic components of mission held by Presbyterian missionaries that began and nurtured this educational endeavor in its early decades. Those same priorities guide the vision of the university that now has 9,000 students with majors ranging from divinity to marine biology.

In 1899 Dr. Horace B. Silliman, a retired businessman from New York, donated $10,000 for the founding of an industrial school for the education of the Filipino people. The Presbyterian Board of Foreign Missions sent Dr. David Hibbard and his wife, Laura, to start the school in 1901. The first class of 15 boys studied reading, geography, arithmetic and grammar. The first building, now named Silliman Hall, was shipped piece by piece from upstate New York and completed in 1909. Soon thereafter the first Presbyterian church in the Philippines, a hospital and the first Protestant school of theology in the country were established in what is known today as the university campus. Those were the early days in the development of the Protestant Christianity in the Philippines. 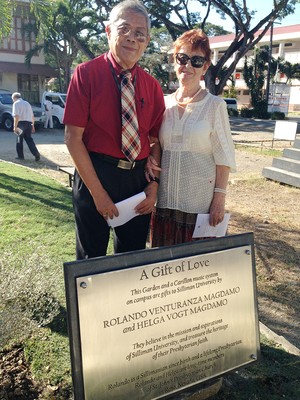 Rolando Venturanza Magdamo, a graduate of Silliman University, and his wife, Helga Vogt Magdamo, donated a Presbyterian Mission Garden and a Carillon music system to the school in honor of the centennial of the Silliman University Church (1906-2016). —Rachel Yates

In recognition of this momentous occasion, Dumaguete City was chosen as the location of regional gathering of mission co-workers, with PC(USA) personnel coming from 10 other Asian countries. University president, Dr. Ben S. Malayang III, stated during the program held at Silliman Hall that the guiding vision for the school is “to proclaim our faith in such a way that people of other faiths see the face of God in what we do.” Presbyterian World Mission Director, the Rev. Dr. Hunter Farrell, affirmed that after a century “God continues to call us together and forward.”

The commemorative “Presbyterian Mission Garden” was donated by Rolando Venturanza Magdamo, a graduate of Silliman, and his wife, Helga Vogt Magdamo, both members at St. John’s Presbyterian Church in Reno, Nevada. The garden is located between the building that once housed the hospital and the current location of the elementary school.

“Christ still calls us to ministries that nurture our minds, heal our bodies and transform our souls,” said the Rev. Mienda Uriarte, Regional Coordinator for Asia and the Pacific during the garden dedication service.

The garden plaque reads: “This garden celebrates the history and life of Silliman University as legacies of the faith and mission work of Presbyterian Churches in the United States. Through three rocks this garden highlights the three elements of Presbyterian mission works: A school to TEACH the wonders of God’s world; a church to PREACH the wisdom of God’s Word; and a hospital to HEAL the wounds of God’s people and work for healing of all in God’s earth. The three rocks also highlight Silliman’s faith anchor, Christ the Via, Veritas, Vita.

A video, describing the centenary of service at Silliman University, is available on YouTube.