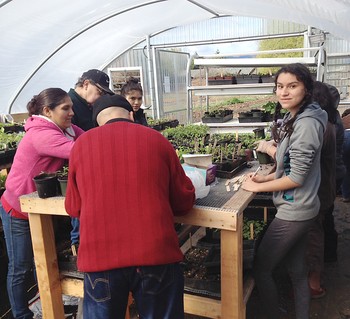 Each year, on a Sunday during Lent, Presbyterians across the country take time to celebrate Self-Development of People (SDOP), a ministry of the One Great Hour of Sharing. Now in its 46th year, SDOP focuses on poor, oppressed and disadvantaged people by establishing partnerships with low-income community groups domestically and around the world.

Since the ministry began in 1970, SDOP has provided support to more than 5,600 community projects in 67 countries. Working with its national committee, 25 presbytery and three synod committees, SDOP provides grants to communities struggling with social justice and economic issues. More than $100 million have been distributed to communities around the world since the beginning.

March 13th has been designated as SDOP Sunday this year and church leaders are hoping congregations will take note.

“It’s an opportunity for congregations to celebrate this wonderful ministry,” said Cynthia White, SDOP coordinator. “Through worship, our community partners and elected members participate in services by preaching or making a Minute for Missions presentation.”

In an interview last fall for SDOP’s 45th anniversary, the Rev. Curtis A. Kearns, Jr., who served on the national committee, said it is a ministry like no other. “I feel it is one of the most creative and important mission programs that the church is involved in because our society is very competitive and aggressive. Seldom are there programs which confirm and encourage people. SDOP is one program that does.”

White says she has been blessed with the opportunity to visit SDOP-supported communities over the years to see how the grant funding has taken root.

“One of the first projects SDOP funded in 1979 was the Shinnecock Tribal Oyster Farm in New York and it is still there today,” she said. “A group of Native Americans have been working in this business for over 35 years.”

White says SDOP has remained true to its mandate to engage in partnership with economically poor, oppressed and disadvantaged people.

SDOP’s primary source of income is approximately one-third of the One Great Hour of Sharing offering. Presbyterian Disaster Assistance and the Presbyterian Hunger Program are the other programs receiving a portion of the offering.

People interested in getting involved with SDOP can participate in different ways. Give to the One Great Hour of Sharing, contact SDOP about serving on the national or local committee, plan local community workshops on the SDOP grant application process or invite SDOP funded project speakers to your church.

Go to the SDOP web page for more information.