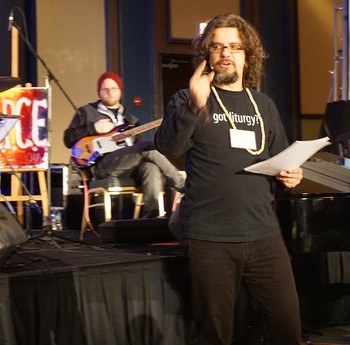 Which was exactly the point.

Adopting—and even embodying—the theme of this year’s Association of Presbyterian Church Educators (APCE) annual event, “See It! Hear It! Live It!” from Isaiah 43, Carvalhaes donned wings, sang, cooed, ran, and set the pages of his manuscript flying as he delivered his sermon.

And later—during the celebration of Communion—he allowed his face to be painted, and, in turn, applied body paint to anyone who wished to receive it during the sacrament.

All to the jazz sounds of Lucy Smith and her trio.

“Can you hear the sounds of gunshots killing yet another black boy somewhere in the United States or Brazil,” he implored. “Can you hear somebody calling your name, asking you, ‘Are you alive?’ Can you hear the nasty words being spoken to fat kids, black kids, gay kids…? Can you hear the single mothers having to work two, three jobs getting miserable salaries to feed their children? Can you hear the joy and laughter within your own family? Can you still hear God’s voice?”

He interpreted the text as having been written for Israel, “returning from exile, returning to their God, their land, and to their old names.”

“What have you lost in your life that has the power of your name, that has taken away the strength of your soul, your ability to perform and to lead life to the fullest,” he asked the gathering. “What have you lost that made you lose the connection with yourself, with God, and with the least of these? What is it that is robbing your faith, making you lose the sense of how much you are loved and how much you can love?”

Exile in today’s U.S. culture, he concluded—other than specifically for those cultures in the U.S., such as Native Americans and African-Americans, who have experienced exile as a part of their history—seems to be a state of unhappiness. And happiness, he said, is about having more and more things.

“In fact, the joy of life lies in desire desiring desire,” he said. “The joy of the Christmas gift is in the opening of the next presents, not to enjoy each one of them. Our enjoyment is always elsewhere, not with what we have or who we have, or who we are.”

Carvalhaes said that people are afraid “that if we do not desire desire [sic] we are going to find boredom, and boredom reminds us of desperation, and desperation looms too close. We have lost the yearning of the saint who says all he wants is God.”

He preached a return to desiring God. A return to the gospel message.

“If the gospel hasn’t made you free yet, you have yet to read the gospel,” he said. “Don’t be afraid. We are free, brothers and sisters.”

For Carvalhaes, the gospel comes down to doing justice. To the church living out its calling.

“A big church has a big heart and a big faith who cries for justice, who says black lives matter—a big church is the one who has the ears to live the gospel fully,” he said. “God’s voice is always in the margins, in places we can’t see, in places we don’t want to see, even though we know where it comes from. To hear the gospel is to gain a knowledge that will tell you who you are that will make you somebody else.”

The body painting ritual, with which his sermon closed, was intended as a “mark of God’s voice inscribed in our bodies.”