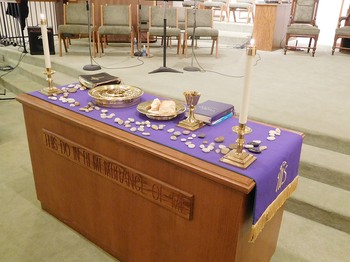 Not only is the Rev. Debra Carl Freeman’s extended family “well-steeped in Presbyterianism”—with a father, husband, two brothers, and a brother-in-law, who are all PC(USA) teaching elders, along with additional ministers on her husband Jim’s side of the family—but so is the congregation she currently serves.

Especially when it comes to Lenten practices.

Freeman was called four years ago as interim pastor of the 80-member First Presbyterian Church of Jacksonville, Arkansas, and has served churches in the Presbytery of Arkansas for 26 years. She says her current congregation is no newcomer to the observance of Lenten disciplines, which have been largely reclaimed by Reformed churches only in the last few decades.

“For much of our history, Reformed churches have been uncomfortable with the observance of Lent,” says the Rev. Dr. David Gambrell, associate for worship in the Presbyterian Mission Agency’s office of Theology and Worship. “In the past fifty years, however, many contemporary Presbyterian congregations have embraced the season as a regular opportunity for spiritual renewal and deeper relationship with Christ.”

Freeman says that First Church has been holding Lenten services since the late 1980s.

“In fact, I actually participated in one of the Lenten services here back in the 1990s,” she says. “They have a rich tradition in their worship, and have had good ministers leading them.” 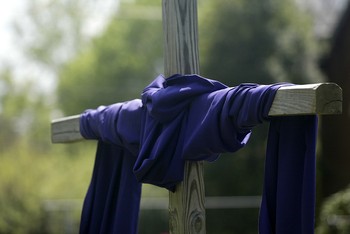 One new dimension Freeman introduced to the congregation—in collaboration with Mary Jane Fischer, the church’s music director—was a more holistic understanding of the season, complete with some meaningful additions to the church’s traditional Lenten services.

“Mostly what we try to do is help the congregation and any visitors as they walk the journey to the cross and the empty tomb,” she says. “Although I’ve talked to them about the idea of giving something up or taking something on, I have encouraged that it not be an overly simple thing that you’re going to take right back on in six weeks, but rather that you allow God to work through that experience. The movement of Lent is the opportunity for transformation. When we do that sort of thing, it’s meant more historically and traditionally to be a change in us—to help us grow and change.”

What Freeman says is different about the congregation’s Wednesday evening Lenten services this year is the intentional incorporation of the church’s history and its members’ stories.

“We did a discerning process about a year ago, through which we did a simplified timeline of the congregation’s history,” Freeman says. “The congregation has been invited to write on pieces of paper the things that are not listed in that official record. Then, on Wednesday nights when we have Communion, we’re asking them to reflect not only on their own lives in a variety of areas, but also to reflect on the congregation’s life.”

Thus far on Wednesday evenings, Freeman has used as her foundational texts 1 Peter 2:4-10, “the living stone”—for which she placed stones and candles on the table and talked about the figurative “stones” that people carry around—and Psalm 13, on the theme, “Where is God?”

“The series will continue in terms of the timeline,” she says. “This focused time allows for people to do quiet reflection in the service, both personally and corporately.”

Through it all—including Freeman’s role as interim pastor in helping to lead the church through its own season of transition—her prayer continues to be, “Will God make this meaningful? Will this help move us to where we need to go?”

And, throughout Lent, Freeman continues to undergo her own transformation.

She says that Jesus must have had some sense of what was coming.

“I would think there might be a little apprehension for him as well,” adds Freeman, “especially when he’s sitting in that garden and asks for it to go.”

Read a related article, “The fall and rise of Holy Week,” by David Gambrell.