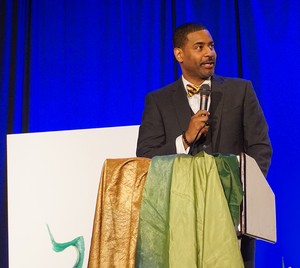 The graceful entrance of a young liturgical dancer, Erin Williams—followed by a liturgy written and delivered by the children of Knox Presbyterian Church, Naperville, and its director of Children and Family Ministries, Jenny Hubbard—prepared the way for worshipers on the final day (Jan. 30) of the 2016 Association of Presbyterian Church Educators (APCE) to hear the Rev. Otis Moss III’s message to “make a way.”

Moss—author, speaker, activist, and senior pastor of Trinity United Church of Christ in Chicago—based his sermon on the proclamation of John the baptizer in Mark 1:1-8, who was called to make a way for Jesus.

Citing example after example of renowned people who changed the world, Moss named those who mentored, influenced, and made a way for their more well-known successors. Olive Schreiner, the South African writer, feminist, and anti-Apartheid activist, made a way for Howard Thurman.

“We have a tendency to lift up and celebrate names from American history,” said Moss. “The Rev. Dr. Martin Luther King Jr. changed the social landscape, but somebody made a track for him, Vernon Johns.”

Johns was pastor of the Dexter Avenue Baptist Church in Montgomery, Ala., before King.

“Before you get excited about Wynton Marsalis, there was Miles Davis, and one must know Buddy Bolden,” he said. “There’s always someone who lays a track. Before Toni Morrison, there was Zora Neale Hurston. We gather in this space knowing you sit here not because you’re so wonderful and cute but because somebody made a way for you.”

Returning to the text, Moss observed that John the baptizer does not set up a ministry in Jerusalem but goes out into the desert, where he is satisfied with the ministry to which he was called.

“Dare to take a desert assignment,” Moss urged the gathering of church educators. “Where we have been called is where God has placed you. Stop looking to see if the grass is greener on the other side—it might be Astroturf. Stay where you are and recognize your assignment. God will give you unique and powerful things and open your eyes to new possibilities.”

Moss said John’s proclamation is bigger than his location. “It is not your location, it is your proclamation,” he said. “You don’t want a mega church and a mini theology.”

Concluding with a powerful, rhythmic litany of the biblical figures who preceded Jesus—culminating in “before there was an Adam and Eve there was God”—he charged his hearers to make a way for somebody else.

“Somebody is coming behind you,” Moss said, “and we have been called to make a way.”

Following a time of prayer, an offering was received for APCE’s Val Murphy Scholarship, which assists deserving persons with lodging, meals, registration, and travel for the annual event.  David Thornton, pastor of Sixth-Grace Presbyterian Church, Chicago, from which Val Murphy retired, dedicated the offering.

“Almighty God, we ask your blessings…especially as we are reminded of how these gifts shall continue to help those who shall come in the name of furthering Christian education,” Thornton prayed. “We know that the late Val Murphy made a way for so many Christian educators throughout this denomination, throughout Christendom…And to the one who was also called the Greatest Teacher, we thank you for this opportunity to give—to give for the cause for the purpose of Christian education. We will be so careful to give you all the glory all the praise.”