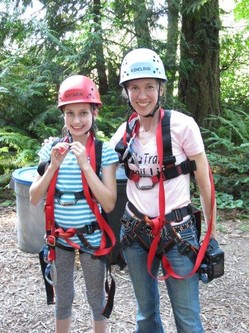 Found guilty of criminal trespassing, Abby Brockway and her four climate activist colleagues—known as the Delta 5—are nevertheless determined to march on in their quest for climate justice. The recent Delta 5 trial was significant for a number of reasons; it brought attention to the Pacific Northwest as an up-and-coming fossil fuel corridor, and highlighted civil disobedience as a potential change agent for climate activists. But most significant, perhaps, was the defendants’ use of the “necessity defense,” which states that breaking the law to prevent greater harm—in this instance, avert climate change—is justified. The necessity defense has never been successfully used in a U.S. court for climate-related civil disobedience cases, a fact that still holds true after the conclusion of the Delta 5 trial.

Brockway, a ruling elder at Woodland Park Presbyterian Church in Seattle, believes society must find alternate energy sources and embrace the concept that the planet’s fossil fuels should be kept in the ground as much as possible. She points to three specific incidents that compelled her to become involved with climate activism. In July 2013 an oil train’s brakes failed in Lac Megantic, Quebec, killing 47 people when it exploded and destroyed parts of its downtown. A year later, she heard the story of a locomotive engineer who was fired for refusing to cancel a scheduled brake inspection for his train. Performing the inspection contributed to an already massive delay in rail traffic that day and the engineer was fired for creating an intentional work slowdown. A mere two weeks later, an oil train derailed just a mile from her daughter’s school.

“’An injury to one is an injury to all’ had been floating into my consciousness during this period, and I believe we are all connected,” says Brockway. “But after the train derailed near my daughter’s school I knew I had to do something, so I signed up for action camp that taught me how to be a peaceful activist. I learned to plan actions.”

It was at camp where she met two of her four Delta colleagues, Patrick Mazza and Liz Spoerri. That meeting, and subsequently meeting Mike LaPointe and Jackie Minchew, led them to join Rising Tide Seattle. The five of them later erected a tripod in front of a parked oil train on Labor Day 2014 in the BNSF rail yard located in Everett, Washington. Abby climbed to the top of the 18-foot tripod while the other four locked down the structure’s base. They stayed for eight hours before being arrested and charged with second degree trespassing and blocking/delaying a train. The jury would eventually find them not guilty of the blocking a train charge.

“We felt we needed to trespass because we felt the railroad and oil companies were trespassing on our communities,” says Brockway. “We were actively petitioning state government and Governor Jay Inslee (WA) to call for a moratorium on all proposed fossil fuel permits and oil by rail until it is safe.”

Brockway points out a lot of planning and focus went into this specific civil disobedience effort.

“We chose this particular rail spur because it was safe. The action was designed to let other trains through. We value our rail system and had no intention of delaying trains slated for other business. We love trains!”

It took over a year for the trial to come to fruition, and according to Brockway the necessity defense was the group’s primary focus from day one. She personally engaged all forms of government before she embarked on the train action; including lobbying legislators, writing Governor Inslee on local and state climate issues, and even writing President Obama about global climate change. During the trial her co-defendants described efforts to promote electric vehicles and policies for energy efficient power grids and carbon reduction. Experts testified on their behalf about the dangers of transporting oil by rail and fossil fuels’ contribution to global warming. Nonetheless, the judge ruled they failed to establish the necessity defense and ordered the jury to ignore expert witness testimony. It was a precedent-setting obstacle to overcome, and a legal strategy that Brockway and her colleagues knew was not without risk.

“Direct action is all about risk,” says Brockway. “We do all we can to limit the risk but we need to understand and calculate it—and understanding that one must be willing to pay the price is an important element of the necessity defense. If we had no necessity defense we still fully admitted to trespassing and blocking the train, and could only let the jury know we were just ordinary citizens committed to change through loving acts.”

The key changes the Delta 5 and their supporters seek center on fossil fuels. There are currently about 20 refinery, transportation and fossil fuel-related infrastructure projects proposed or planned for the west coast. One estimate has more than 800 metric tons of carbon moving through the region if all the projects are approved, thus creating a fossil fuel corridor in the Pacific Northwest. As a Presbyterian, Brockway opines on what the church should do about fossil fuel divestment.

“I believe the church needs to do this work and do it in a timely manner. This is a moral issue and the church has moral currency that other organizations simply don’t have. It’s important for people of all faith to work together, and Pope Francis laid out a case for action, and speaks very clearly on this for all humanity,” states Brockway. “I hope we can shed some light on the true costs and damage of fossil fuels.”

In a recommendation approved by the Presbyterian Mission Agency Board on February 5, PC(USA)’s Mission Responsibility Through Investment (MRTI) ministry is not recommending that PC(USA) divest its holdings from fossil fuel companies. Instead, the MRTI report:

With more than 170 certified PC(USA) Earth Care Congregations, and decades of national General Assembly policies speaking to the urgency of climate change, Presbyterians take the call to act on climate change very seriously, and in numerous ways. While the issue of divestment from fossil fuel companies will go to the 2016 General Assembly later this summer, there is climate action throughout the denomination currently in the form of Creation Care Sundays, Alternative Transportation Sundays, churches with EPA ENERGY STAR certification, congregations with solar panels, and adoption of low-carbon footprints. PC(USA) agencies also offer congregational resources for earth care, low-interest loans for energy efficiency and renewable energy projects, and a fossil-free common fund for investments.

Rebecca Barnes, associate of environmental ministries for the Presbyterian Hunger Program, and attendee at the recent Conference of the Parties (COP) 21 in Paris, shares the need for urgent and comprehensive action.

“It is clear that all Presbyterians, all Americans, all global citizens must seriously invest and act in a clean, healthy future in drastic ways. There is indeed urgency, and we are all called by God to act in the ways we are able.”

Brockway summed up her thoughts on what environmentally conscious Presbyterians must do to aid in the climate change battle.

“We need people to know what’s going on, and question the work being done in our churches,” she said. “We treat the acute symptoms of a problem, but this often allows broken and destructive systems to keep limping along. Let’s have a larger view and be a confident partner in our walk with Jesus and not be afraid to let broken systems fall. It’s our obligation to start connecting the dots and realize all these issues are interconnected. We must do deeper work going behind the symptoms to address and heal the causes of the brokenness.”