Key topics are discipleship, connection and interaction for ministry in the digital age 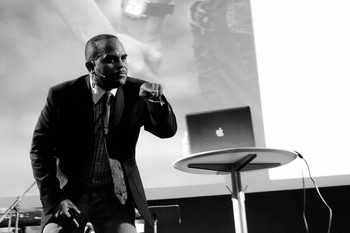 Ralph B. Watkins stood looking out at 175 worshippers a few weeks ago. It was his first Sunday as new pastor to a congregation. Almost immediately, the associate professor of evangelism and church growth at Columbia Theological Seminary recognized something. The congregation, whose average age was in its 60’s, already knew him.

People were greeting him before the service, saying things like, “I googled you before you came,” “I saw you on Instagram,” “I read your posts on twitter.” Most of the younger people told him they’d watched him on YouTube, and seen his television show.

“Nearly the entire congregation had already begun to develop a relationship with me virtually,” says Watkins, “and now we were face to face.”

Watkins, whose research and work is centered in building 21st century churches that effectively uses digital and social media as tools for evangelism, particularly to millennials, is one of the featured plenary speakers at the upcoming Presbyterian Church (U.S.A.) Evangelism ministries, “Be the Light,” Go Disciple Live Conference August 8-11.

At the conference, Watkins says his presentations will help church fully grasp how the “triple revolution” of internet, social media and mobile phones has fundamentally changed how human beings connect with each other.

“Our social order has been completely reordered,” says Watkins. “I used to have to go to a store at certain times to buy things, or watch a certain show I like at certain time. But now I watch what I want when I want; I shop when I want to.”

Yet the church, Watkins says, continues to say to people,” meet me at 11 a.m. on Sunday morning,” and views social media as an add on, which he believes needs to change.

“Why don’t we flip that paradigm and say ‘we’re going to let social media be the bread and butter of our ministry?’”

Watkins says we’re all wrestling with our institutions being disrupted, citing examples of how Blockbluster turned down an offer to buy Netflix, how Kodak invented the digital camera but didn’t think it would work, and how for years, the out-of-business Borders in essence outsourced its online book selling to Amazon.

“Blockbuster actually said to Netflix, ‘no you’ll die,’” says Watkins. “Kodak thought film was its bread and butter, that it would last forever. People went to Borders to find a book, and then bought it on Amazon.”

Watkins strongly believes that ministry should be disrupted and that any live worship event held in church should do three things: get a person closer to God, build community with God’s people, and connect them to God’s activity in the world.

“It’s what the millennials have been saying, ‘Get me closer to God, to God’s mission,’” says Watkins. “Churches need to move beyond it being about ‘saving my church,’ and recognize ‘God wants us to participate in saving the world.’ Based on this, how do we live? How do we share the gospel, build community and honor our traditions in a social order that has been completely revolutionized?”

Early bird registration for the Go Disciple Live, “Be the Light” conference continues through March 15. See bios of the conference’s plenary speakers, whom PNS will feature in the coming months: