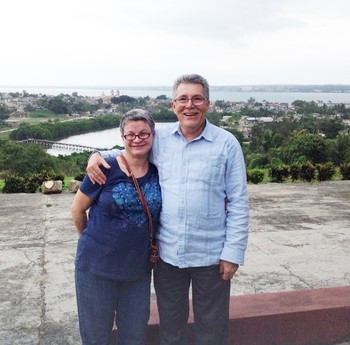 "Our Cuban church partners have consistently asked us to work toward restoring diplomatic relations between our two countries and lifting the embargo. Since 1969 we have worked toward this end,” she said. “The opening of embassies in Washington, D.C. and in Havana was a great sign of hope for the people of Cuba and President Obama's upcoming trip is another important gesture of friendship and mutual respect.”

Although the two governments have been estranged since the Cuban Revolution in 1959, several PC(USA) presbyteries and congregations have maintained relationships with churches there. The Presbyterian-Reformed Church in Cuba was part of the Synod of New Jersey prior to the revolution and is a long-time World Mission’s global partner. The PC(USA) currently has over 80 congregational and presbytery partnerships with church bodies in Cuba.

A few months after re-establishing diplomatic relationships between the US and Cuba in July 2015, David Cortes-Fuentes and Josey Saez-Acevedo answered the call to teach at the Evangelical Theological Seminary in Mantanzas,where there are not enough Cuban professors to meet the demand for seminary instruction. David Cortes-Fuentes teaches New Testament and Greek. Josefina Saez-Acevedo is using her experience in Christian education and ministry to serve church partners.

Both are from Puerto Rican families, David growing up in Puerto Rico and Josey in New York City. Both began their higher education studies in Puerto Rico. It’s a background they hope will help them as they begin work in Cuba.

“Our sense of call to Cuba gives us the opportunity of teaching and learning together in a setting of cultural and ethnic affinities we share in common,” said Saez-Acevedo. They are optimistic about the new opportunities in the church and the country. “We want to be a part of that hope,” she said.

David says they go to Cuba seeking to “engage, equip and inform church leaders in ministry grounded in a healthy biblical and theological foundation.”

Prior to entering mission service, David served for four years as pastor of Iglesia Presbiteriana Hispana Emmanuel in Claremont, California. From 2000 to 2009, he was director of academic services and associate professor of New Testament at San Francisco Theological Seminary’s Southern California campus. He also has been director of the Hispanic Ministries Program at McCormick Theological Seminary in Chicago and pastor of Ceiba Baja Presbyterian Church in Aguadilla, Puerto Rico.

Josey comes to mission service after serving for seven years as director of children’s ministry at La Verne Heights Presbyterian Church in La Verne, California. From 2003 to 2007, she was interim director of Christian education for children and family ministry at Claremont Presbyterian Church in Claremont, California. She also has worked as a database manager, a college admissions office assistant, and a preschool teacher. She received an A.A. degree from the University of Puerto Rico and did additional study at Mt. San Antonio College in Walnut, California, and San Francisco Theological Seminary.

“Many of the Protestant and evangelical churches in Cuba are heirs to the work of North American missionaries and churches. For many years we have formed a bridge of friendship, along with other Cuba and North Americans, in search of a possible normalization of relations between our two countries, praying and acting for the arrival of a new era.

“…We invite our counterparts, brothers and sisters in faith, and all the men and women of goodwill in the United States and the World to come together in prayer and action for this historic moment that both our nations are living…”

The Compassion, Peace and Justice ministry, along with the Office of Public Witness is sponsoring a 90-minute webinar on Cuba, “What’s Next?” on Thursday, March 17th at 3 p.m. (EDT). To register, please click here.