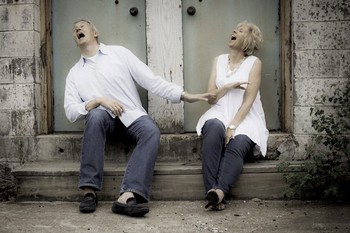 Mike Breen along with his wife Sally founded 3DM, a movement that has trained thousands of churches and leaders in how to move into a discipling culture and missional mindset. —Photo provided

Mike Breen is known around the world as one of the leading innovators in the church discipling movement. After leading a church re-plant that became the largest in England, he launched the movement in Europe, helping plant more than 1,400 churches in four years.

Now living in South Carolina, Breen, along with his wife Sally, founded 3DM. The movement aims to put discipleship and mission back into the hands of everyday Christians has spread across five continents and trains thousands of churches and leaders on how to move into a missional mindset.

Yet Breen, one of the plenary speakers at the upcoming Presbyterian Church (U.S.A.) Evangelism ministries “Be the Light” Go Disciple Live conference August 8-11, will forever be identified by happened to him when he was sixteen years old.

He began having conversations with a temporary staff member of the religious education department at his comprehensive school. She was a missionary returning from Africa. Hearing what he was wrestling with she loaned him her Bible.

“As I read during summer recess I became a Christian,” says Breen. “Without her, I wouldn’t have any sense that I needed to follow Christ, even though there was movement within me seeking to become a better person.”

This conversion experience in the 1970’s was revolutionary for Breen. Raised by parents, who were in his words, “happy pagans, normal non-Christians in England,” he began to feel a sense of urgency for the church in the nation of Britain that was in deep decline.

“Listen, I had no inkling, no consciousness of Christ,” he says. “I think it is because of the deep influence in the Church of the West—and as result on us—that if we just convey the right information, everything will be alright.”

Because Breen is dyslexic he processes information in a different kind of way, which made it difficult for him growing up. Yet, he now sees his dyslexia as a benefit that helped prepare him for our post literate culture that knows how to read but rarely does.

“We have to remember to engage scripture in new ways,” says Breen. “The right kind of information is the Word of God correctly applied in a person’s life, who becomes a living example, imperfect, yet able to connect to what God is doing and saying.”

At 3DM Breen works with geometric “life shapes” including “life circles” that are built around these kind of “grace-filled, Kairos” moments of God to listen to God’s voice and respond obediently.

Breen believes these moments happen throughout our day, but because we are not mindful, or aware, we are not able to connect to them. “This is what Jesus was referring to when he spoke of the Kingdom of God as being ‘right now,’” he says.

One of Breen’s greatest Kairos moments was participating in leading both his parents to Christ—and baptizing them. “It was a very unusual experience,” he says, “but like all grace-filled moments it happened on the continuum of repentance and belief. To repent is to turn one’s mind, to trustful engagement of your life with what God is saying. That’s when we see the Kingdom.”

At the conference in St. Pete Beach, Florida, Breen will discuss how the church can effectively sustain and reproduce these kinds of disciples. To do so Breen says the church must give them opportunities to participate in God’s mission in contemporary culture that inspire them to see the revelation of scripture unfolding and to recognize more deeply what God is saying and doing.

“This really fits within Presbyterian ethos, its history and tradition,” says Breen. “One of the great challenges facing the western American church is whether we’re making disciples or simply servicing customers? Having been in all sides of church ministry, and working with thousands of pastors, I understand the problem, which is why we’re working to help leaders understand and solve it.”