Moderator joined by delegation of church and agency leaders on journey 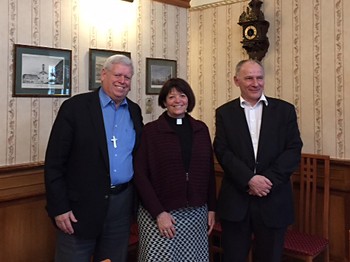 Representatives from the Presbyterian Church (U.S.A.) are spending Holy Week in parts of Europe, following the path of Syrian refugees who fled war and violence at home and are seeking safety in other parts of the world. Church Moderator Heath Rada is joined by Presbyterian Disaster Assistance Coordinator the Rev. Dr. Laurie Kraus; Burkhard Paetzold, regional liaison for World Mission; as well as Derek Mcleod, mission pastor of Myers Park Presbyterian Church in Charlotte, North Carolina; and member Edward Taylor Stukes. Myers Park was instrumental in initiating and sponsoring the trip.

Presbyterian Disaster Assistance, in conjunction with the ACT Alliance and Church World Service, has been providing financial support for those caring for refugees and migrants as they make their journey. Myers Park has been partnering with Hungarian Reformed churches to provide support for refugees.

“For many Syrians who have fled their homeland as the war enters its sixth year, their journey—fraught with desperation, danger and the risk of death—is a via dolorosa, a way of suffering that too often ends in refugee camps, poverty, a reception marked by suspicion rather than welcome, or even a return to the place from which they sought to escape,” said Kraus. “Some fortunate find new safe harbor, welcome and a chance to build a new life.”

According to the United Nations, the world is experiencing the largest number of refugees and displaced persons since the end of World War II, more than 60 million people. The United Nations High Commission for Refugees (UNHCR) reports there are 4.8 million Syrian refugees registered. This includes 2.1 million registered in Egypt, Iraq, Jordan and Lebanon, 1.9 million in Turkey and 28,000 registered in North Africa. About a half million are living in refugee camps while the majority are living in cities, towns and rural areas across the region. 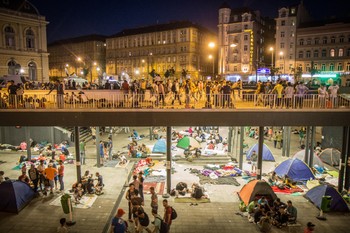 Syrian refugees at a train station in Budapest in the summer of 2015. —Daniel Fekete, HIA/ACT

“Germany has provided a haven for many, but European borders are closing and migrants are stuck on the borders of Greece and Turkey, seeking safe passage and refuge,” said Kraus. “Throughout this journey, we will be conversing with faith partners who are engaged in this work and try to see through the eyes of our Syrian refugee neighbors in order that we might share what we have seen and learned back home.”

Paetzold, who is headquartered in Germany, is working to connect Presbyterians in the U.S. with partner churches and programs in Eastern and Central Europe.

“During a previous visit, we connected with St. Columba’s Church in Budapest that is hosting a refugee ministry of the Reformed Church in Hungary and Kalunba Charity,” said Paetzold. “The ministry includes a small resettlement program and we became aware that resettlement should be one protection tool for refugees at risk besides other tools like humanitarian visa, sponsorship and family reunification.”

The UNHCR is preparing a pledging conference, “Pathways of Admission for Syrian Refugees” scheduled for March 30. Paetzold said Presbyterians should advocate for increased resettlement pledges of European and North American governments.

“Resettlement would be a safe alternative to the risky and often deadly passage and would undermine the smugglers’ business,” he said. “At the same time, it reduces the challenge of a chaotic spontaneous arrival that is not easy to manage.”

The Obama Administration has set a goal for the U.S. to resettle 10,000 Syrian refugees this fiscal year compared to Canada’s commitment to resettle 37,000 Syrians. The UNHCR had asked for 130,000 resettlement places worldwide. Church World Service has called for the resettlement of 100,000.

The PC(USA) Office of Immigration Issues has created a resource page around the “We Choose Welcome” campaign with theological and advocacy information for those wishing to study the issue and participate in action on behalf of Syrian refugees.