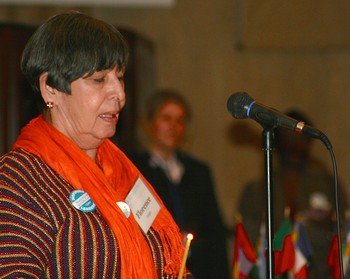 Presbyterian participant Florence Vargas leads the ecumenical community in worship during the 59th Session of the UN Commission on the Status of Women. —Photo courtesy of the Presbyterian Ministry at the United Nations

What is the Commission on the Status of Women?

The Commission on the Status of Women is a functional Commission of the Economic and Social Council of the United Nations. It is one of the oldest in the UN, currently consisting of 45 members; 13 from Africa, 11 from Asia, nine from Latin America/the Caribbean, eight from western Europe and other countries (including the U.S.), and four from eastern Europe.  Member States are elected to four-year terms.

The Commission’s primary focus is women’s rights and helping shape global standards on gender equality and the empowerment of women.  In recent years, the Commission has dedicated its annual sessions to women and girls’ access to education and full employment, empowerment of women living in rural areas and their role in poverty and hunger eradication, and violence against women and girls.

This year, the Commission will devote its meeting to a consideration of women’s empowerment and its link to sustainable development. It will also review the outcome from the 57th Commission (2013) on The elimination and prevention of all forms of violence against women and girls.

The Commission will spend two weeks in general discussion and specific panel discussions to identify gaps and challenges and recommend areas for improvement.

How does the Presbyterian Church (U.S.A.) participate in the Commission?

NGOs with accreditation from the UN Economic and Social Council are able to send participants to the Commission. In 1998, the Presbyterian Church (U.S.A.) applied for and received accreditation.

Presbyterians have long affirmed equal rights for women and have worked for them within the UN system. A Presbyterian delegation participated in the 1995 Beijing Conference. This year, the church will have as many as 33 taking part in the Commission and related activities. Some will be participating in the Commission for the first time, while others have been attending for years.

We will work with our partners in Ecumenical Women to advocate with Commission members for women’s rights with a focus on violence and discrimination against women, poverty, inequalities, and climate change, education and training of women and girls, and women and health including full access to reproductive health and informed decision-making.

Written statements by the Presbyterian Church (U.S.A.) and Ecumenical Women organizations have been submitted to the 60th Commission on the Status of Women related to women’s empowerment and sustainable development as work continues to shape the outcome of the Commission.

How does the Presbyterian Church (U.S.A.) work with Ecumenical Women?

Ecumenical Women is an international coalition of church denominations and ecumenical organizations. The organization was founded in 2000 on the five-year review of the Beijing Platform, to enhance the collaboration of progressive churches and organizations to advocate for women’s rights at the Commission.

Why does the Presbyterian Church (U.S.A.) participate in the Commission on the Status of Women?

Our faith proclaims that all people are made in God’s image and are to be honored and treated with dignity and respect. Through word and deed, Jesus revealed God’s intention that we love one another and invites all people to do the same. Through participation in the Commission on the Status of Women, the Presbyterian Church (U.S.A.) will witness to God’s love for all as we work to promote the rights of women.

Our participation provides an opportunity to look back and recognize whether we think the world has progressed or has fallen short in the pursuit of women’s rights. We will use our place at the table to take part in the conversation, reminding governments that we are watching and care about how the rights of women are honored and protected. We will also learn ways to further our efforts to honor the rights of women in our communities and around the world.

How can I learn more?

Information about the Commission will be shared through Twitter, look for the hashtags #PCUSACSW60 and #CSW60 as well as on a number of blogs and Facebook pages, including:

A major political declaration on women’s rights: the Beijing Declaration and Platform for Action

The Beijing Platform came out of the Fourth World Conference on Women in 1995. The main focus was gender equality and the empowerment of women.  For two weeks, representatives of more than 180 governments hammered out historic commitments to produce the most progressive plan for advancing women’s rights.

The platform identified strategic objectives and concerns to advance women’s rights and challenged government and civil society to develop and implement viable solutions.