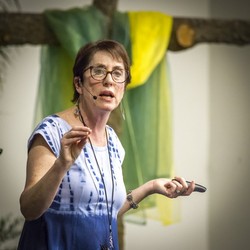 Vera White shared the PC(USA) ‘1001’ story with more than 400 church leaders from around the world at a recent International Fresh Expressions Conference. —Bev Meldrum Photography

Vera White, national coordinator for 1001 New Worshiping Communities, remembers the gratitude she felt and how it came to her. She was about to give a presentation to more than 400 church leaders from around the world at the International Fresh Expressions Conference in Cape Town, South Africa.

“It was kind of like a pay it forward moment for me,” says White. “Instead of always being the one trying soak everything up from them, I was able to share what we had experienced with those who were thinking about starting new church planting initiatives.”

White says she and others in the PC(USA) 1001 movement are grateful for the leadership ideas gained and experiences they’ve had with Fresh Expressions. The initiative, started by the Archbishops of Canterbury and York with the Methodist Council in 2004, encouraged church planters to create new gatherings to engage primarily with people who have never been to church.

In little over a decade, over a thousand of these “Fresh Expressions of Church” have sprung up in the Church of England; with thousands more in partner denominations across Europe and around the world.

Fresh Expressions was key in helping shape the 1001 movement, giving White and other PC(USA) leaders opportunities to meet with the archbishops, scholars and leaders in England who were at forefront of the Fresh Expressions movement. 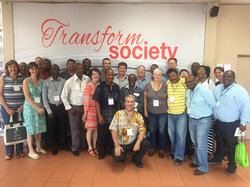 White (front row center left) with all of the Presbyterians at the Fresh Expressions International conference. They discussed how the Reformed heritage might help them equip leaders to initiate change in church life. —Photo provided by Vera White.

White encouraged church leaders from 20 different denominations and 13 countries, “to pay attention to what God is already doing in their communities” and “to participate in that Holy Spirit activity.”

She emphasized that the 1001 movement is “God’s story” and “the story of brave leaders” who are starting new ministries in places like “trailer parks, under bridges, and in restaurants and bars.”

“They were so energized and excited to learn about new ways of thinking about church planting,” says White. “We found that everybody had come together out of this sense that God wants us to move our ministries forward, beyond the walls of the church, into our communities, all over the world.”

White says the issues facing the church in the United States are not that different from issues facing the church on “the other side of the world,” adding that she was “somewhat surprised” to see so many African church leaders thinking about the need for the church to become more missional and contextual. Traditional Western thought has been that the institutional church is still on a growth trajectory in Africa.

While at the conference, White met with a group of 25 people from the Uniting Presbyterian Church of South Africa to discuss how the Presbyterian Reformed heritage might equip leaders to initiate change in church life, while adapting to 21st century challenges.

After the conference, White spent two days conducting “1001 workshops” for two presbyteries in Johannesburg and one in Cape Town. During these day-long events, White was able to participate in more personal conversations about the context of ministry in South Arica and U.S.—while encouraging participants to recognize that each new expression of church will look different because each addresses a specific context.