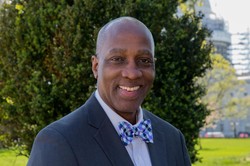 The Reverend Dr. J. Herbert Nelson is the nominee to become the next Stated Clerk of the General Assembly of Presbyterian Church (U.S.A.), the committee charged with bringing a candidate to the 222nd General Assembly (2016) announced today.

“We, the committee, believe J. Herbert Nelson will be both priest and prophet to the Presbyterian Church (U.S.A.) and to our ecumenical and interreligious sisters and brothers,” said the Reverend Carol McDonald, moderator of the Stated Clerk Nomination Committee (SCNC).

“He has the heart and soul of a pastor; when he asks, ‘how are you doing?’ he really wants to know. His prophetic voice will call us as a denomination to do ‘kingdom work’—to reclaim the biblical and theological foundations of who we are, to forge again community that unites rather than divides, and to step boldly into the world to speak the message of Jesus,” she said.

Nelson is a teaching elder and member of National Capital Presbytery who has served since 2010 as director of the PC(USA) Office of Public Witness in Washington, D.C. From 1986 to 1997 he served as pastor of St. James Presbyterian Church in Greensboro, North Carolina, and from 1998 to 2010 he was the organizing pastor for Liberation Community Church in Memphis, Tennessee. He also has served as associate director of the Benjamin L. Hooks Institute for Social Change at the University of Memphis in Tennessee.

“I feel both heartened and humbled to be selected as the nominee for the office of Stated Clerk by the Stated Clerk Nomination Committee,” Nelson said. “It is my belief that our future opportunities as a denomination outweigh our challenges. We must collectively commit to serving the Kingdom of God and not simply the Church.”

Nelson’s name will be placed in nomination on Sunday, June 19, during a plenary session of the 222nd General Assembly (2016) in Portland, Oregon. If elected, he will be the first African American Stated Clerk of the PC(USA). The General Assembly runs June 18–25.

“I think the committee has made a wise and exciting choice,” said the Reverend Gradye Parsons, current PC(USA) Stated Clerk. “I look forward to working with the Reverend J. Herbert Nelson in the transition and supporting his ministry as Stated Clerk.”

McDonald said the committee’s decision on the nominee was “very clear.”

“Our process involved a substantial written application, a video presentation, a phone conversation, and two face-to-face interviews,” McDonald said. “In addition, we spoke with a significant number of primary and secondary references about Nelson’s gifts for this office, all of whom said they believed he is the right person for this time in the life of our church.”

Nelson, 56, holds a bachelor of arts degree in political science from Johnson C. Smith University, a master of divinity degree from Johnson C. Smith Theological Seminary, and a doctor of ministry degree from Louisville Presbyterian Theological Seminary. He is married to the Reverend Gail Porter Nelson, pastor of Northminster Presbyterian Church in Washington, D.C. They have one adult daughter.

A detailed report of the work and process of the Stated Clerk Nomination Committee is available here and on PC-biz.org.