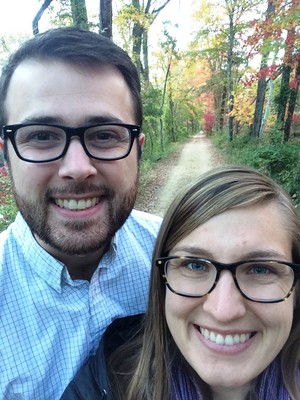 Dexter and Liz Kearny on a trail in Princeton, N.J. —Liz Kearny

Dexter and Liz Kearny unabashedly describe themselves as “Presbyterian through and through.”

The couple, both raised in Presbyterian Church (U.S.A.) congregations, met at University Ministries, a parachurch ministry at University Presbyterian Church for college students in Seattle, when they were undergraduates at the University of Washington. Dexter Kearny, a PC(USA) “preacher’s kid,” heard his call to ministry during a University Ministries-sponsored mission trip to India in the summer of 2009. Liz Kearny’s growing sense of call came into sharper focus not long after her own two-month mission experience in Palestine, subsequent college graduation, and ultimately during her internship for the same campus ministry program through which she and Dexter first met.

“I think I was made to do this,” Liz recalled thinking one day while serving as an intern with University Ministries. “I loved preaching, I loved getting to be with students, I loved organizing programs and mission trips. Dexter and I said we actually might have a very similar call.”

A call both to ministry and to marriage, as it turned out.

After dating for three years, they were married in September 2012 at University Presbyterian Church. Liz took a job at a community mental health agency in Seattle, where Dexter became a study assistant at Earl Palmer Ministries. When Palmer, a graduate of Princeton Theological Seminary, had a speaking engagement there, Dexter accompanied him to the campus.

“Wow, this is a pretty great place; I could see us here,” Dexter told his wife upon returning to Seattle from Princeton, “but we had lots of questions about how the money would work out.”

That’s when the connectional church fully entered in.

“We wouldn’t be here without the Presbyterian Study Grant,” said Liz Kearny from Princeton Seminary, where she and her husband are seniors, now both certified by Seattle Presbytery, pending graduation, as ready to receive a call. “Even though we both got full tuition covered by the seminary, we still had living expenses—insurance, books, food, all that kind of stuff. We had intended to try to continue to apply for more grants, when our friend, Kari [Olson], told us about the Presbyterian Study Grant.”

The Presbyterian Study Grant program—administered through the Presbyterian Mission Agency’s office of Financial Aid—serves full-time M.Div. or M.A.C.E. students attending a PC(USA)-related seminary who are preparing to serve in a PC(USA) congregation. It awards students between $1,000–$4,000 annually, with the possibility of supplemental grants for students who meet the eligibility requirements, specifically racial ethnic and Native American students.

“Liz and I met in ministry,” said Dexter Kearny. “We felt called to seminary at the same time. We both got accepted at the same school. We both got financial aid from the school. Our home churches and our families helped support us, but we still needed more, or else we would have had to take out loans and be under the constraint of paying them back. We’ve been blessed by the PC(USA) study grant. It freed us up from that fear and anxiety that can come from being in debt and always worrying about money. We have continued to work part time jobs to supplement our income to try to be as faithful with the resources that we have, but without the grant, we’d be really stuck.”

Both Liz and Dexter agree that the Presbyterian Study Grant has allowed them “to just be full-time students.”

“We’ve been able to take full, unpaid internships—stipended internships with hospitals and churches,” Dexter Kearny said. “It’s really allowed us to fully explore our call. It’s required us to trust that God would provide. We’re both coming to seminary, we don’t know how we’re going to pay for it. Does one person go, then the next person go? The grant has allowed us to fully explore our calls and has given us that freedom.”

Laura Bryan, the Presbyterian Mission Agency’s associate for Financial Aid, actively encourages all students at Presbyterian-related seminaries to consider applying. “Even if you think you’re not eligible,” she said, “take five minutes to fill out the application.”

Through Bryan and other advocates and mentors who have guided them through their journey to ministry—including their mentored peer group in the PC(USA)’s Company of New Pastors program—both Liz and Dexter have felt strongly supported by the denomination.

“I really got the sense that [Laura] knew that this money was really important to our ability to be in school together, and she just went above and beyond to make sure everything was expedited for us,” Liz Kearny said.

Added Dexter Kearny, “We loved the idea of connectional church before, but now we’ve really been able to experience the way God works through our connections and works through us being part of a larger body. We’ve experienced the fruits of living in that communal way.”

Liz Kearny said that the grant has also allowed the couple to be totally open in their search as they seek a call together. “We have applied all over the country,” she said.

And having now been served by the grant program, the Kearnys have, in turn, passed along the good word.

The Presbyterian Study Grant serves the PC(USA) by supporting the next generation of creative, adaptive, transformative leaders preparing for service as teaching elders or Christian educators. The application deadline for the 2016–2017 academic year is May 15.