Historic meeting between Cuban and US Presbyterians begins dialog 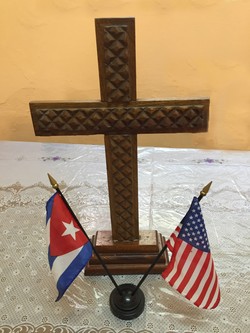 A delegation from the presbyteries of Peace River, Tampa Bay and Tropical Florida made a historic trip to Cuba in February 2016 to meet with leaders of the Presbyterian-Reformed Church in Cuba (PRCC), their first official meeting in 54 years. Prior to 1967, the Cuban Church was a Presbytery within the Synod of New Jersey in the United Presbyterian Church and was nurtured by missionaries and substantial mission giving. The Rev. Daniel Izquierdo, the PRCC Synod Executive, says it was an environment of “dependent plenty.”

The Cuban revolution and the U.S. embargo made the continuation of that financial support for Cuban mission and ministry impossible, and in fact it severed communications. Properties were expropriated by the Cuban government. Feeling threatened for their faith, many Cuban Presbyterian pastors, teachers and church members fled Cuba, most for the United States, especially south Florida. The Cuban church managed to survive and minister with seriously diminished resources in the midst of the hostile political culture. Cuban Church leaders characterize the church’s shift as moving from ‘dependent plenty to shared scarcity.’ They are proud of their survival and conscious culture of self-sufficiency that now defines the Cuban Church. The Presbyterian-Reformed Church of Cuba became autonomous of the U.S. church in 1967.

There is strong desire for reconciliation between Presbyterian Cubans who remain in Cuba and those who emigrated to the United States. This is probably the Cuban Church’s greatest desire and perhaps the most complicated to achieve. Resentment remains toward those who left, some say abandoned, Cuba. People who have settled in the U.S. are sometimes suspicious of the Cubans who remain in Cuba, as if they are pawns of the communist government. There are open wounds on both sides of the Florida straits, deep hurts. Cubans in Cuba and in the U.S. have widely differing perspectives on the problem and therefore solutions. This huge divide is the essence of the reason this visit by south Florida presbyteries to Cuba was called historic. There is hope that a bridge of shared faith and Christian relationship can be built and nurtured for the good of the kingdom of Christ. Presbyterians of Cuba and south Florida are so close and yet it seems very, very far. The flight from Miami to Havana was about 40 minutes. But it is a world apart for many who still feel the pain.

There are many PC(USA) congregations in loving relationships with cousin Presbyterians in Cuba. But there are stories about imbalances and jealousies emerging as result of some churches receiving much attention from U.S. churches while others receive none. Deeply appreciative of the material aid provided by PC(USA) partners, the Cuban church is also profoundly sensitive to the possibility of creating new dependency. They are reticent to make needs known, too. Proudly autonomous, they worry about the natural cultural ethos of U.S. Presbyterians to tell them what they need, to fix things for the less fortunate and to require, even subtly, recognition for what good we do. The Cubans called it paternalism, a pattern they well know. Knowing what is in someone else’s best interest. It drives disempowerment and lacks accountability.

They ask PC(USA) churches act through a partnership called the Cuba Partners Network as we seek to provide financial support.

The south Florida Presbyterian delegation came away from this historic visit with blessed assurance that God is at work in Cuba, and that God’s grace has sustained the church there through difficult times. South Florida presbytery leaders are beginning to view this newly opening opportunity as something like an ecumenical partnership. There is commitment to lift each other up in prayer for the unity of the church, to be rooted in the reformed tradition, to be fascinated and curious about what is different between us, to acknowledge our divided and wounded condition, to be willing to learn and to view this new relationship as a journey.